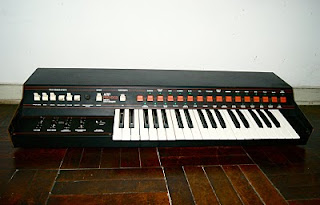 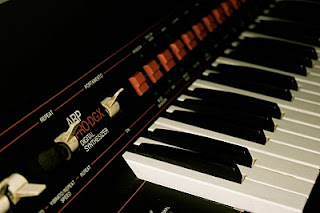 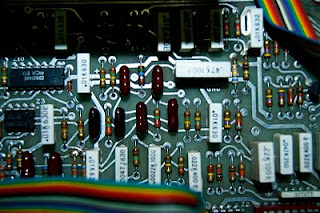 ARP Instruments, Inc. was founded by electrical engineer Alan R. Pearlman in 1969 and within a little more than 10 years of existence the company manufactured more than 20 different models, some very famous like the ARP 2600, ARP Odyssey, ARP Solina String Ensemble and the ARP Pro-soloist, all in the early 70's. ARP PRO DGX is a kind of re-editing - or update - of ARP Pro-soloist and was manufactured between 1977 and the end of the company (in 1981). There were two versions of the PRO-DGX (Mk1 and Mk2) and the changes from Pro-soloist to PRO-DGX Mk1 are essentially on the outside of the keyboard and just a few components but the differences from Pro-soloist to to PRO-DGX Mk2 (the model I have) were several changes in its electronic part (the filter is very different from that first one), as well as the visual aesthetics on the instrument, that incorporated the now classic ARP synthesizers look, in orange and black colors on its chassis. 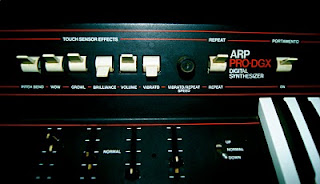 ARP PRO-DGX has 30 preset sounds (selected by switchers), sliders for controlling volume, filter cutoff (here called "Brilliance"), portamento and aftertouch (which can be adjusted to control volume, vibrato, "wow", "growl", filter and the pitch bend). It also has a knob to adjust the speed of the vibrato and repeat. Its extension is 3 octaves and its 37 keys are from C to C. The keyboard can be transposed a whole octave up or down via a switcher located beside the bass keys. On the rear there are two audio outputs jacks (one XLR and one P10) and another jack for connecting foot-switch to on and off the portamento.

The sound presets are divided into two banks (A and B) and in sessions of wind instruments, strings and effects. A interesting thing is that to trigger a preset of bank A you shall press the switcher related to its sound but to select presets from the bank B you shall press two switchers at the same time. A light (green to the left and right presets and red for the central ones) indicates the corresponding sound. The presets are: Bassoon, English Horn, Oboe, Clarinet, Flute, Tuba, Trombone, French Horn, Trumpet, Cello, Violin, Bass, Piano, Banjo and Fuzz Guitar 1 (bank A) and Buzz Bassoon, Sax, Space Reed, Telstar, Song Whistle, Noze , Pulsar, Comic Wow, Mute Trumpet, Steel Guitar, Harpsichord, Space Bass, Steel Drum, Country Guitar and Fuzz Guitar 2 (bank B). Like any factory pre-programmed synth, some sounds are very nice and others aren't! 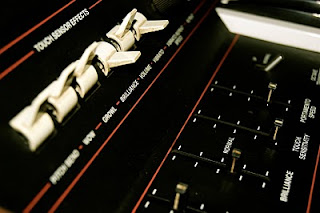 Some of the main artists who used the ARP Pro-DGX were Linda McCartney (she appears playing a PRO-DGX Mk2 on the song "So Bad", from the movie "Give my regads to the Broad Street", 1984), Steve Walsh of Kansas (on the live album "Two for the show," 1978), the 80's french electronic duo Elli et Jacno (on their videoclip "Main das la main", 1980) and the duo formed by my friend Brian Kehew and Roger Manning Jr. (responsibles for "The Moog Cookbook" project, in the 90's). 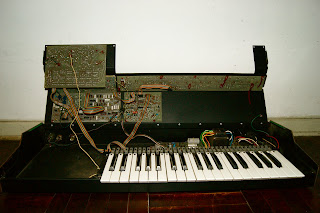 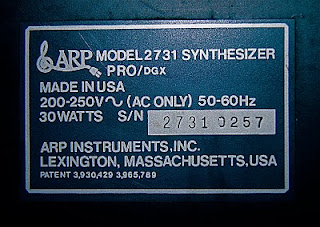 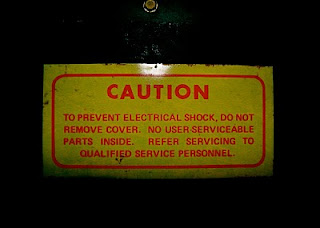 The ARP Pro-DGX that is mine nowadays I swapped, in 2008, with my friend Emilio Benvenutti. He needed a tube amp to his studio and I wanted the keyboard, so it was very simple to swap. This synthesizer was his for almost 10 years, as far as I remember. We found it in a music store in São Leopoldo (Rio Grande do Sul), along with a with a Roland Juno-60. I bought the Roland (unfortunately I had the stupid idea of selling it in the late 90's) and Emilio bought the ARP and kept it in his room since! Because of the fact that it had been standing for a long time, I had to clean all the contacts, but only that. All the sliders, switches and the vibrato/repeat knob are originals from the factory and the keyboard doesn't have even a single scratch on the chassis. Even the sticker that says to "beware of electric shock" when you repair the instrument, it is intact! This synth serial number is 2731 - a number that identifies only the model - 0257 so, I believe, it was one of the first of this model to be manufactured. 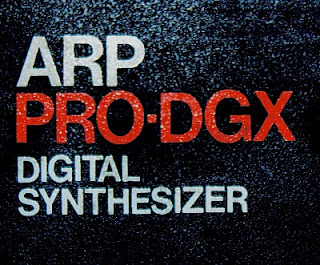 
I recorded this demonstration video on February 15, 2011!


Here you can watch Linda McCartney and her ARP PRO-DGX with Paul McCartney on "So Bad" (she is playing a solo on it at 2:01 and on the end of the song):


And I used many presets of my ARP PRO-DGX on "The garden on earthly delights", from my new album, "Zeitgeist/propaganda" (all the orchestra-like soloing sounds on this track were recorded with this instrument!!!):