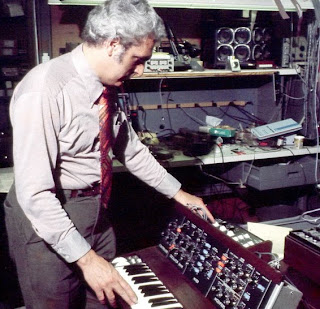 In 1973 Moog Music put on the market various accessories to be attached to the Minimoog model D and also to their Modular models (they released the Moog modular 15, 35 and 55 in the same year): the 1130 Percussion Controller, the 1121 footswitch, the 1120 foot controller, the famous 1150 Ribbon Controller and the 1125 Sample and hold unit. Nowadays it is very difficult to find one of these equipments, even they being only accessories (only worked attached to the synthesizers), although some of these units appears on ebay from time to time - especially in the USA. 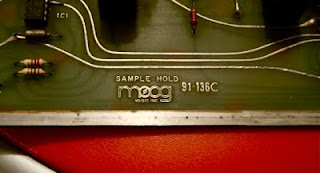 The 1125 Sample and Hold is a device that captures the voltage range of the synthesizer, creates a pattern and repeats it constantly. The waveform (sawtooth or random) of this pattern is controlled by a slider on the left side of the 1125 -the other two sliders are a glide and the scale controla. Two knobs in the center of the equipment, one for speed (rate) and other for the sample pattern are located above three on/off switches: one to record and the other two to start and stop the sample (a red light indicates when it is working). Five switches on the right side complete the unit: one to control the extent of sampling, two on/off switches controls the outputs of the instrument, an on/off switch controls the trigger and another controls the size (short or long) of the gate. 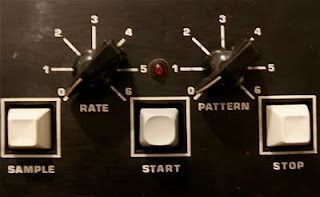 I didn't find information on artists who have used - or at least credited in any album - the 1125 but since this unit was sold (usually, although it was optional) with modular models, I think some musicians that used the Moog Modular Synthesizers had this equipment in their sets. 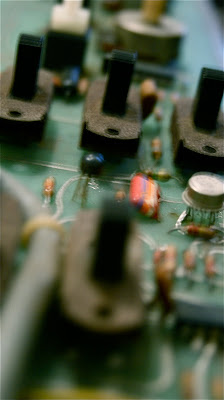 I purchased my 1125 Sample and Hold unit - along with my Minimoog - in September 2008. As I wrote on the post about the Minimoog model D, my Minimoog was at Violeta de Outono's rehearsals place when I bought it, but the Sample and Hold was in another location so it took me a while to find some free time to "rescue" it. I tried to connect the 1125 with the Minimoog sometimes but I believe it has a poor contact it some component, but I intend to fix it soon.

The serial number of my Sample and Hold is 2913 and the informations about how to connect it to the Minimoog (as in my case) are printed at the bottom of the equipment. It also has multiple cables to be plugged into the synthesizer and they all seem to be in good condition. I do not believe that this accessory has been used by Violeta de Outono, although I may be wrong. When I bought my Minimoog from Angelo Pastorello (ex-bassist from Violeta de Outono) he also sold me the 1125! 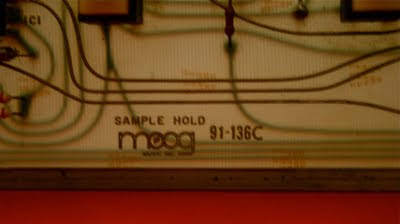 photos: Kay Mavrides and found on the internet.


My 1125 Sample and Hold is not working and because of it I didn't record any video. But I found a unique and rare video posted on youtube by another Moog/vintage synth aficionado (or maybe someone that only wanted to demonstrate his 1125 to sell) and so I post it here, as a small illustration of the operation of this device:

And I found this ad of the Moog accessories: 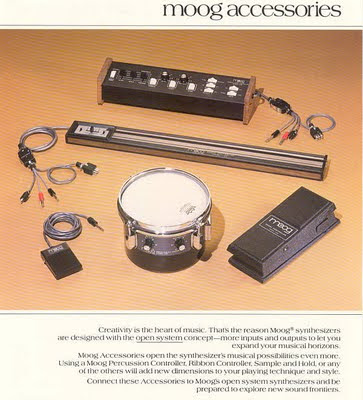