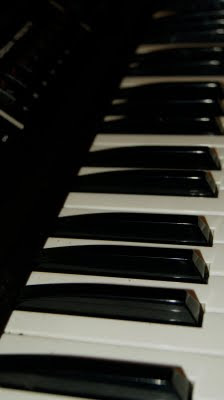 Founded in the late '60s/early '70s by Mario Crucianelli, Crumar was an Italian company that became very famous in its time mainly by their synths, keyboards and organs (both in compact or not so compact models). Mario was brother from Pierro Crucianelli, president of Elka - another very well known Italian company. Crumar existed until 1987 and the company's golden age was in the second half of the '70s, when they put on the market their "Pianoman" and "Stringman" models (1974) and later the model that combined the two machines in one, the "Multiman" model (1977).  Even with this machines achieving a great reputation on the market, for me Crumar's coolest instruments are the "Hammond organ clones" made from 1974 on which had a great sound, very close to Hammond organs, but much more compact and easier to carry than the originals.

With four octave of extension (49 keys) the Toccata organ is fully polyphonic and has eight presets with various organ sounds (from the emphasis on the lower to the higher harmonic overtones). It also has controls of vibrato and a very interesting Leslie cabinet simulator, very close to the sound of the original - the closest I found in organs that have this feature built in. Both vibrato and Leslie simulator (called "Chorale" on Crumar Toccata) has two preset speeds and "Chorale" can be selected via a foot-switch connected by a single cable P-10 in the rear of the instrument. It also has two percussion controls on/off (in 4' and 2 2/3') with independent volume and decay plus a click to the notes. A knob for tuning and an audio output (along with the aforementioned jack for footswitch) on the rear complete the Crumar Toccata. 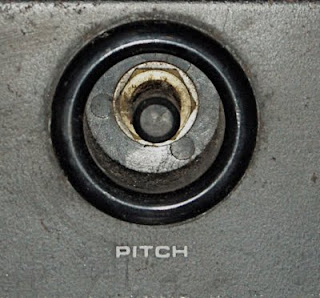 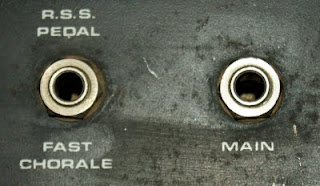 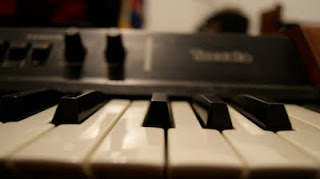 I did not find any information about artist who has used Crumar Toccata in recording or live performances. It's even hard to find anyone - to mention famous players - who has used a Crumar instrument (I only found references to Nick Rhodes of Duran Duran and the jazz/crazy musician Sun Ra, beyond the curious fact that Dr. Robert Moog and engineer Jim Scott were involved with the design of the Spirit synthesizer made by Crumar in 1983). But I used my Crumar Toccata organ as my main organ sound on almost anything, including my first solo album ("Petiscos: sabor churrasco/switched-on Bah!", 2004), on the CD I recorded with Jimi Joe ("Saudade do future", 2005), on Jupiter Maçã's CD "Uma tarde na fruteira" (this organ sound is pretty much the main instrument on the songs "Marchina psichotica do dr. Soup", "Mademoiselle Marchand" and "Sorvete com vocês") and I also played it on several songs from my good friend Plato Divorak! It is the organ that I take for every show I perform or play as a guest musician. My Crumar Toccata organ and my Moog Prodigy that travel more frequently with me (both have almost the same flight hours that me!) 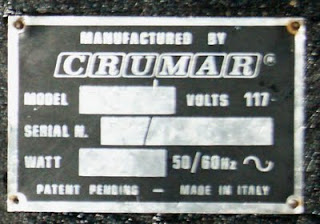 I have my Crumar Toccata organ since 1997. The first album I used it was also the first professional recording in which I participated, the CD "Era uma vez um gato xadrex" by "Acretinice me Atray" (released in 1998). I purchased my Crumar from Fabio Bohn, owner of Arbon, a well known manufacturer of organs and harmoniums in Novo Hamburgo, Rio Grande do Sul. I do not recall how much I paid but I think that was the equivalent of about $ 500, an expensive amount for me in that time, especially if compared with other instruments that I bought in the same period. Fabio also had a "Leslie"-like rotary speaker from Yamaha and remember that I was happy and sad at the same time: happy to buy the organ and sad for not having enough money at this "Leslie". The serial number of my Crumar Toccata is R8/006 3 and, because I use it constantly, I've had to make some adjustments and fix it sometimes. The main repairs were replacing the fuse socket and remake the entire back of the organ - both the socket and the rear part of the cabinet were broken during a flight from Recife to Porto Alegre, in December 2009. To replace the wood from the back side of the organ, I had the help of my friend Roger Severo, an artist from Uruguaiana who lives in São Leopoldo, Rio Grande do Sul - the city I was born. 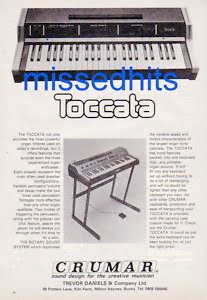