A conversation with Karl Bartos


Karl Bartos was born in Berchtesgaden (a small village in the German Bavarian Apls) on May 31st, 1952. He attended the Rhineland State Conservatory of Music and the Robert Schumann Institute (Düsseldorf). In 1975 one of Karl's teachers told him that he had received a phone call from a man searching for a classical trained percussionist. Karl returned the phone call. The man on the other end was Florian Schneider and soon Karl was inside the famous Kling Klang Studio, with his vibraphone. Some time later, Karl Bartos was one of the four members of the classical Kraftwerk line-up!

From 1975 to 1990 Karl recorded five albums with Kraftwerk - Radio Activity (75), Trans-Europe Express (77), The Man Machine (78), Computer World (81) and Electric Cafe (86) - and, with the quartet, formed the basis of almost every musical genre that came after them, from disco to hip-hop, from synthpop to electro-rock, from techno-pop to house and from dance music back to minimal, genres that are very very very popular today. Those four guys from Düsseldorf - yes, I dare to compare them with the other four from Liverpool because Kraftwerk ARE my own Beatles - changed the world and turned on millions of minds to a new kind of music and aesthetics. And a great sense of humor! More than the robots that they claimed to be on a song called "Die Roboter", those four German guys are real human beings with a specific and very nice - and sometimes very strange and very personal - sense of humor.

All those elements that already existed on Karl's music during his Kraftwerk years are also present on his solo career. Better, he added a great sense of pop music and also a great sense of modernity to his artwork. Far from Kraftwerk since 1990, his solo career is now longer than the days he was a band member. Since 1993, Karl released four solo albums - both using his name or as Elektric Music: Esperanto (1993), Electric Music (1998), Communication (2003) and Off the Record (2013), besides many collaborations with other artists.

Karl's new album, Off The Record, was released on March 15th, 2013. It contains songs that the man composed and/or had the original idea from 1975 to 1993. Karl took those ideas and brought to life 12 tracks, using his vintage analog synthesizers. The first track, "Automium", released one month before "Off The Record", already shows exactly what the whole album is: Karl Bartos doing his best. It's interesting to listen to the album at least one time without thinking in Karl Bartos as a Kraftwerk member, maybe it's the best way to conceive that the music created by this gentleman doesn't depend on the fact that he was a Kraftwerk. But even when you listen to the album thinking in Karl as a Kraftwerk member, you will note that some of the greatest songs by the band had Karl's ideas!

I first contacted Bettina Michael (Karl's manager) some months ago, asking for infos about Karl. One day I asked her if Karl would have interest to be interviewed for my blog. My surprise was that not only he had interest but I could do the interview via skype. Via Skype! I talked with one of my superheroes via Skype. Great. The interview was made on a Monday, April 22nd, 2013 1 p.m. here in Brazil = 6 p.m. there in Hamburg, where Karl lives nowadays. Amazed and knowing that everything I was thinking to ask must have been answered by Karl a million times before (and thanks to the modern days, we can easily find it on the internet) I asked some things that I'd like to know. But more important than that, I had the opportunity to check that one of the superheroes of my childhood and teenage days also had his own heroes (The Beatles and The Rolling Stones) and it's a very nice and gentle person! With a calm voice, Karl Bartos told me that:

ASTRONAUTA - Hi Karl, how are you? I was amazed when Bettina told me about the possibility of doing the interview via Skype, because you are one of my superheroes.


KARL - Oh, come on. So, what can I do for you, what do you wanna know?
ASTRONAUTA - I'd like to ask you some questions about your new album - "Off The Record" - and also about your career. First of all, what are your earliest musical memories and when did you become interested in music? And what kind of music you used to listen during your childhood and teenage days?
KARL - When I was a small boy, at the age of 10 or 12, my sister fell in love with a British soldier, his name was Peter. Peter came to our house and he brought the first records from England. So, actually the first one was "A hard day's night" from The Beatles and an album from the Rolling Stones, the name was "Aftermath". So I got this very old record player with a built-in speaker, you know, in the... what's the name? On top... So, there was a built-in speaker and it was in mono and I was listening all day, for weeks and months, to those two records: "A hard day's night" from The Beatles and "Aftermath" from The Rolling Stones. And looking back, it wasn't such a bad choice.
ASTRONAUTA - And how did you become interested in electronic music?
KARL - It was a time during my musical studies at the university. I got acquainted with the work of Karlheinz Stockhausen. So, I was studying percussion and every percussion player had to play "Zyklus" for one percussion player, by Karlheinz Stockhausen. But then, during the rehearsing of that piece, I came to know his first electronic studies, which were called "Étudie", "Studie Eins", "Studie Zwei". So, that were the first electronic works by Karlheinz Stockhausen. I must have been around 20, 21 of age. And then later I got that famous phone call from the band called Kraftwerk and they introduced me to their studio, Kling Klang Studio, but I did already know about electronic music then.
ASTRONAUTA - Ok! Well, you're releasing "Off The Record", with songs that you wrote (or at least you had the original idea) from 1975 to 1993, that's it? Did you use some tracks that you had already recorded before or did you re-record everything?
KARL - Well, there are a few sounds which actually survived from that set, like in that song "Instant Bayreuth". In the end of the song "Instant Bayreuth" there is a drone, a very dirty drone, which was actually recorded with the Polymoog. So, this is just one original. The next one is called "Vox Humana", there are a few sounds which I early recorded before. Just a few. But basically I was using the old instruments but new recordings.


ASTRONAUTA - That's one of the questions I'd like to ask! You've mentioned on the booklet of "Off the Record", about a Fender Rhodes piano that you bought in 1977 or something like that... Do you still have this piano?
KARL - No, I don't.
ASTRONAUTA - And what are the vintage and analog instruments that you have? I think you have a Poymoog, you've mentioned it.

ASTRONAUTA - I asked you because I'm also a vintage synth and vintage keyboard collector, I have also a Polymoog, a Minimoog, all those things and it's a subject that interests me so much. I'll search for that magazine.
KARL - Ya.
ASTRONAUTA - In 2000 you released a single called "15 minutes of fame" and in your album "Communication" (2003) you have a song called "Ultraviolet", I don't know if is it a coincidence, but Ultraviolet was the nickname of that model, Isabelle Colling Dufreste, and you wrote a song on your new album, also about Isabelle. I'd like to know if do you see Andy Warhol and his works as a influence to your work, do you feel like that?
KARL - Well, I think he is one of the major artists from the sixties and seventies and every pop artist at that time, musicians, have been influenced by Andy Warhol, because it was so obvious what he did. He is one of the mentors of pop, of visual pop. So, I just remember an interview, he said "when I go down on Broadway and I see all those signs and posters and neon signs on the wall, they all look to me like contemporary art and I just take my Polaroid and make a polaroid and that's a piece of art". So he was really following the patch of Dadaism, of the Dada art. For him, everything was already made. And the way he took photographs out of the newspaper and he blow them up like big until you just see sole the dots in it. So, this actually reminds me a little bit what has been done within electronic music. I always refer to the sound, I call my sound "pictographic sound", because it just surfaces in the... If you just see it, if you only see its surface, it's very pure information.
But there's another layer which I think is very important for conceiving Andy Warhol: he got his Factory. You know, the loft?
ASTRONAUTA - Yes, Andy Warhol's loft.
KARL - It was called The Factory and the atmosphere always reminded me a little bit of that Kling Klang Studio, because there was lots of artists going in into the Factory and delivering a certain atmosphere. And this applies exactly to the Kling Klang Studio at that time. I came there in 1975 and Andy Warhol was big at that period, so I just remember we were going to the railway station and we bought Andy Warhol's Interview, you know, the newspaper? I didn't like him so much as a person, I must say. He must have been very very weird but as an artist he had a really good antenna to get the vibe of that period.
ASTRONAUTA - Ok, Karl. That's it. One last question I'd like to ask is about your memories from the period you came to Brazil, in 2008 I think it was... No, I don't think, I'm sure of that because you played in Porto Alegre - it's near the city I was born - you played there on my birthday, October 11th. And I'd like to ask you about your memories from that shows in Brazil...
KARL - I must say I mix all the memories up from all the four gigs or so. But I just remember, it might could have been in Porto Alegre, the day we arrived there was a flood or something like that and they had to change the venue.
ASTRONAUTA - Ok, I remember that, it was in Porto Alegre.
KARL - So it was very very improvised but it was really wild. So everybody was - I think - quite into it. And we got ready with all the equipment just before we had to play. So, everything went to the very last minute, but everybody was cool about it in Brazil... So, I think it's different if you do a gig in Europe.
ASTRONAUTA - Ok! Well, Karl, thank you so much, it's a great pleasure to talk with you. As I told you in the beginning of the interview, you're one of my superheroes, it's amazing to contact you and to have this opportunity to interview you.
KARL - No problems, I love Skype. Skype is great. It just builds a personal level, you see the face of your partner, your conversation partner and it's much nicer than to talk on the phone. All my best to Brazil and see you soon!
ASTRONAUTA - Hope to see you soon and to meet you in person here in Brazil soon!
KARL - Ok, bye for now!
ASTRONAUTA - Bye! 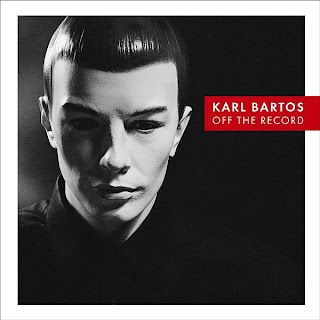