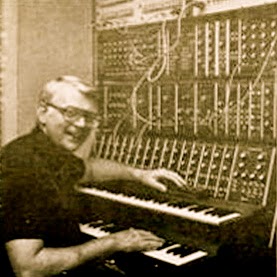 Harry Gilbert Trythall was born in Knoxville, Tennessee, on October 28, 1930. He began to study piano and to compose very early in his teenage days. At age 16 he gave his first public performance as a solo pianist, in 1947. In the 50s he became aware of the electronic music that was being created in the United States and Europe. In 1960 he graduated in Music Theory and Composition in Cornell University, in Ithaca, NY, and joined the music faculty in George Peabody College for Teachers in Nashville, Tennessee, in 1964, and it was just at George Peabody College that Gil Trythall assembled the college's first electronic music studio.

In 1968, George Peabody College received a grant and, to increase and develop further the electronic music studio at the institution, a newly released Moog IIIc synthesizer was purchased, and also courses in music synthesis were added to George Peabody College. In the early '70s, Gil Trythall was commissioned by Rick Powell, from  Athena Records, to realize an album with synthesizer versions for some country music classics. "Switched On Nashville," released in 1972, was a hit, and another similar album was commissioned and released in 1973, "Nashville Gold." In the same year, 1973, Grosset & Dunlap published Mr. Trythall's book "Principles and Practice of Electronic Music." In 1980, Gil Trythall released an LP containing two of his own electronic music compositions, "Luxikon," and "Echospace." This album is a real gem of the electronic music, and everyone who likes the genre should listen to!

During his carrer as a professor, Mr. Trythall taught at Knox College, Peabody College (now part of Vanderblit University), West Virginia University, Brookhaven College (in Dallas,) and from 1999 to 2001, at Universidade do Espirito Santo, Brazil, as a visiting professor! He also designed a program for ear training, KBA Software, and you can find more information on his website: www.musicstudy.com

My first contact with Gil Trythall was via Facebook, and then via email thru his official website. I'd like to thank so much Mr. Trythall for the time he gently spent to answer my questions for the interview, and also Carol Trythall, his wife, for some of the photos published here. And now, the interview with Gil Trythall!


ASTRONAUTA - Gil Trythall, what were your first steps into music and arts? And what kind of music and composers did you like to listen in your childhood and teenage days?

GIL TRYTHALL - Born Oct. 28, 1930, I grew up hearing my mother play classical and popular piano. Dinner guests in the 1930's gathered around the piano and Mom encouraged and accompanied my singing. I taught myself little piano from a beginner's book.

I began formal piano lessons at 13 and started to compose. My first public performance was as soloist in an original composition for piano and wind band, a Smokey Mountain Rhapsody, at a music camp in Gatlinburg, Tennessee, USA, summer 1947. I was 16.

I played and listened to both popular and classical music. My favorite composers were Gershwin, Shostakovich, and Debussy.

ASTRONAUTA - How was your first contact with electronic music and synthesizers? 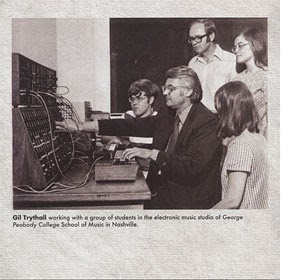 GIL TRYTHALL - I had recordings of European and American tape studio compositions from the 1950's - early 1960's. Therefore, when I joined the music faculty of George Peabody College for Teachers in Nashville, Tennessee, USA in 1964, I started a tape studio in my office. The studio had an Ampex 7.5 i.p.s. stereo tape recorder, a Roberts 3.75, 7.5, and 15 i.p.s. stereo recorder, splicing bar and tape, ruler, sine wave oscillator, and a big war surplus oscillator. I hung several octaves of labelled pre-recorded pitches on tape on my office wall. If I needed a G# above middle C, I went to the wall and cut off the needed duration. A good day produced about 6 seconds of e-music.

These compositions are now in the archives of the University of Tennessee, Knoxville.

ASTRONAUTA - How did you become aware of the Moog Synthesizer in its eraly days? And how did you meet Robert Moog? What are your memories on Robert Moog?

GIL TRYTHALL - When the College received a Federal Grant for the improvement of undergraduate and graduate music education in 1968, the College purchased a Moog IIIc synthesizer, two Ampex 7.5/15 i.p.s. stereo tape recorders, a Macintosh stereo amp, speakers, and provided a studio. We added college courses in music synthesis. An artist colleague at Vanderbilt University, Don Evans, and I created Multi-media performances with multiple slide and film projectors and e-music sound.

Video: This is a Test 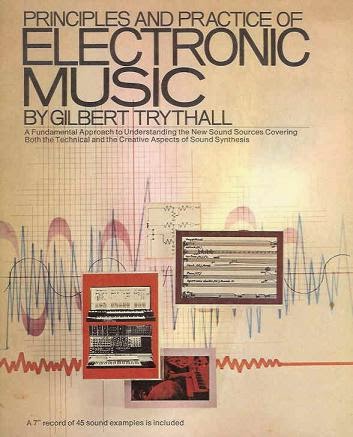 In 1970, we began a series of annual e-music concerts at various colleges and universities with works for voice or instruments accompanied by tape. These annual 'Electronic Music Plus' concerts continued for 19 years. The programs from these concerts are now in the archives of the University of Tennessee, Knoxville, Tennessee, USA.

I first met Robert Moog when he graciously consented to write the preface to my 1973 book, Principles and Practice of Electronic Music, published by Grosset and Dunlap, out of print. (This book is useful today only as a historical record of e-music before 1973.) We stayed up almost all night editing the book. That was Bob Moog, a genius and friend. I met him several times more. He was always the same creative, friendly, generous person, not conscious of money, fame, or rank.

ASTRONAUTA - How was the recording process of your albums "Switched On Nashville" (1972,) and "Nashville Gold" (1973?) Which synthesizers that you've used to record that albums? 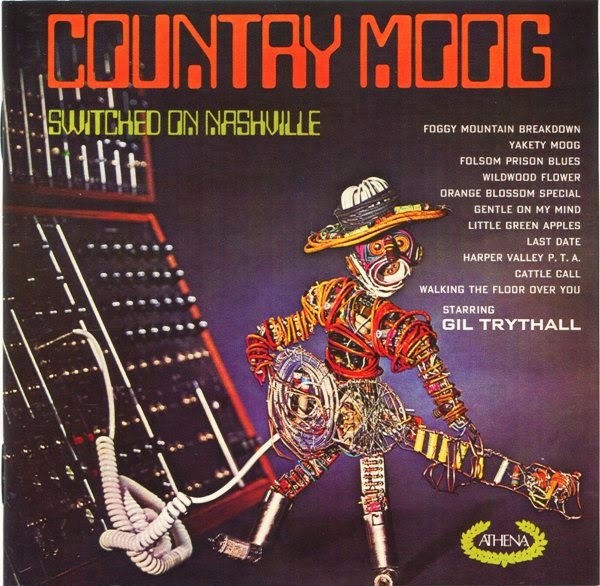 GIL TRYTHALL - One day a record producer, Rick Powell, who had just arrived in Nashville to start a new studio, Athena Records, came to the College e-music studio where I was working. Wendy Carlos' Switched On Bach was a big hit and Rick thought a completely synthesized country music album could be successful. "Would I be interested?" He would produce, select the music and supply an eight track recorder for the job. I signed up.

I transcribed the 45 rpm recordings that Rick selected from top country music artists; and I wrote original arrangements for some country music standards. I taught my classes, worked late at night after college for three months developing patches on the Moog to synthesize the needed instruments and recording each track.

As you know, the Moog IIIc is monophonic; so the arrangement had to be contrapuntal, a solution which my classical training provided. For background chords (pads) I patched and mixed three simultaneous tones (combining filtered multiple oscillators in each) with a push button switch that altered the chord third VCO's from major to minor as needed.

It was fun! Of course the transistors in the early Moog VCO's floated with changes in room temperature. Many times a 'good' take had to be redone because the Moog's pitch had moved up or down, but mostly up. This was great ear training! 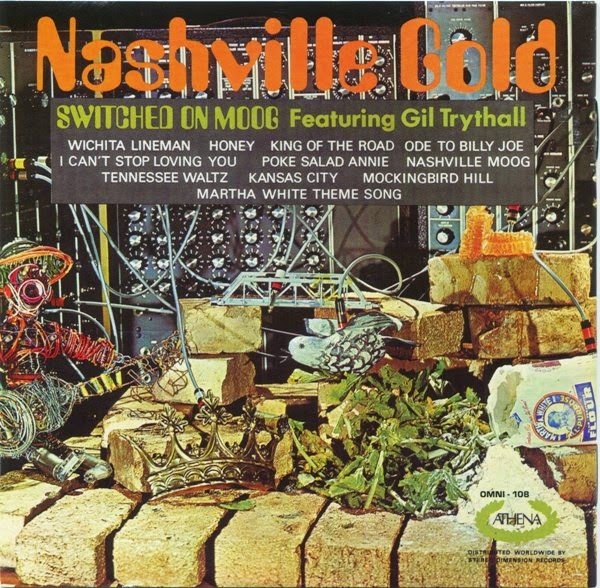 I recorded Switched On Nashville with the School of Music Moog IIIc (working late at night after the school was closed) and a huge, vacuum tube Ampex eight track recorder that Rick supplied. I did Nashville Gold at the Athena Studio with their Moog IIIc and Ampex eight track transistor recorder, also late at night. Rick Powell produced and did final mixes. Both records were hits; but the only ones Athena ever had. My guess is that the studio was undercapitalized. Athena closed, a tragedy for Rick Powell, a fine producer and musician who deserved far better.

ASTRONAUTA - And how about your compositions "Luxikon II," and "Echospace," released in LP, in 1980? What were the instruments used on that pieces, and the recording process? Do you still own some of the synthesizers that you've used to record those pieces and other electronic music works?

GIL TRYTHALL - I composed Echospace with the College Moog IIIc and the two stereo Ampex 7.5/15 i.p.s. recorders using tape studio methods soon after we opened the e-music studio. The Moog output was recorded on Ampex one with the stereo tape threaded to the in-line Ampex two for tape delay. The playback from Ampex two was then mixed with the Moog input, L and R reversed, and re-recorded on Ampex one. I edited results with a splicing bar. The formal structure consists os 12 improvisational sections with pitches derived from successive combinatorial hexachords and a 13th section which returns to the pitches of the first hexachord.

Echospace has two versions: the recorded version and a version for live performance with parts for any number of brass instruments placed around the hall echoing the motives.

I recorded Luxikon II in 1980 with a Moog IIIc, the sample and hold circuit from a MicroMoog, and an eight track Ampex. I still have my MicroMoog and MiniMoog. I sold my IIIc. What a mistake!

ASTRONAUTA - How do you see the changes, both in technology and in the way this technology is used by the composers and the audience, in all those years that you've been active in the musical world as a composer, synthesist, and teacher?

GIL TRYTHALL - I am privileged to have been an observer and practitioner of e-music for the past 50 years. This may be summarized (more or less in sequence) as: (1) the organization of music through tape splicing, signal filtering and mixing. (2) music synthesis using main frame computers (3) monophonic analog synthesizers and multiple track recording, and (4) digital polyphonic synthesizers, MIDI, sampling, and desktop computer software.

The American Society for Electroacoustic Music CD23 provides a window on e-music as practiced today. Of the eight tracks on the record, four are musique concrète, and four are for live performers simultaneous with recorded e-music. These compositional practices date from the early years of e-music. They are expert and expressive compositions.

Summary: all goes well; there is continuing development of e-music styles, forms, and practice.

GIL TRYTHALL - I was a visiting professor at Universidade Federal do Espirito Santo from May, 1999 through April, 2001. My University host, Dr. Marcos Moraes, could not have been more helpful. Marcos and I developed the curriculum for a new undergraduate music major at the University. The students were enthusiastic and appreciative.

Beyond the University circle, Brazilian are wonderful hosts, welcoming and friendly. We made many friends and have many pleasant memories. We loved the Trio Elétricos and impromptu street celebrations. One night in Vitória, two competing Trio Elétricos, one or two blocks apart, playing different songs, came closer and closer to where we lived. The effect was wonderful, much like orchestral pieces by American composer Charles Ives - only better!

Carol, my wife, and I returned a few years ago to see friends in Vitória and to visit Manaus and the Amazonian rainforest. In brief, we love Brazil and Brazilians, miss them, and hope to return some day.

ASTRONAUTA - What are your most recent projects and plans to the future? 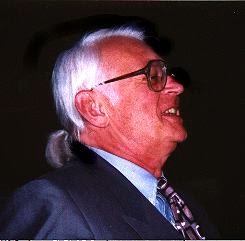 My most recent work, Passacaglia in Eb, combines concrète sounds recorded on an airport assistance vehicle in England's Heatrow airport with music played on a Yamaha SY99 FM sampling synthesizer.

Additional compositions are listed on the right.

In late April, 2015, I will post (on YouTube) Three Fables for narrator, e-music samples from Space Genetics by Paul Scea and Eric Haltmeier (used by permission), with video of the high mountain desert at Big Bend National park on the Tex-Mex border.

Thank you, Fabricio Carvalho, for this opportunity to reminisce. 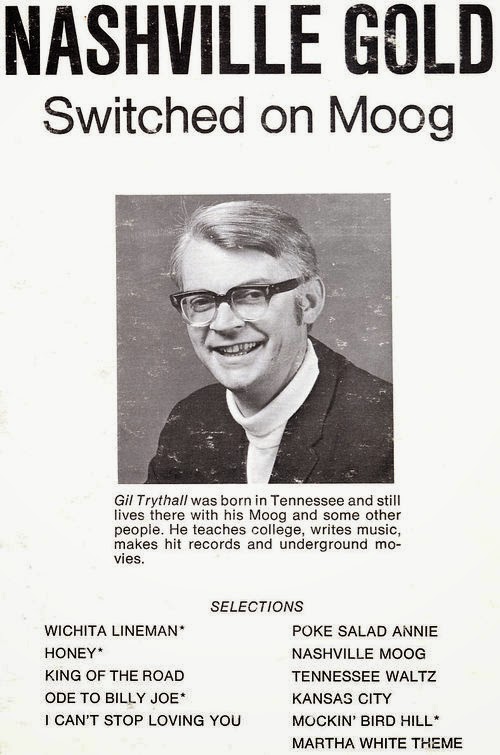 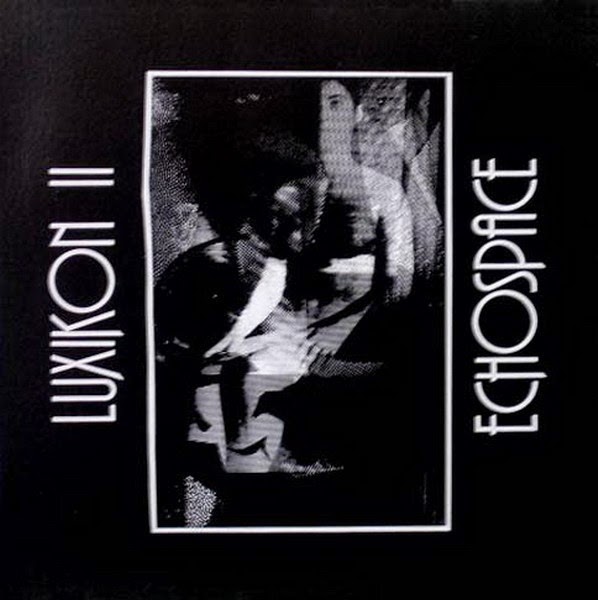 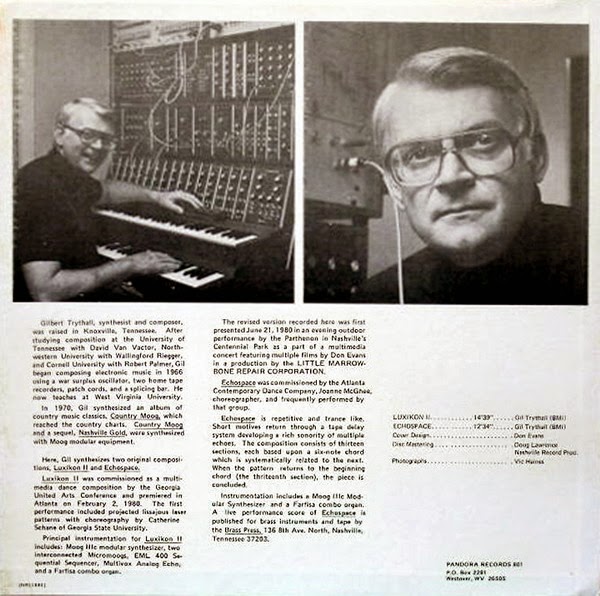