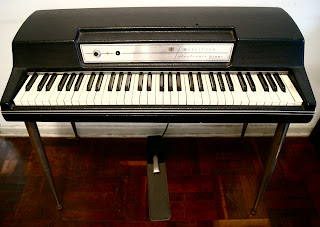 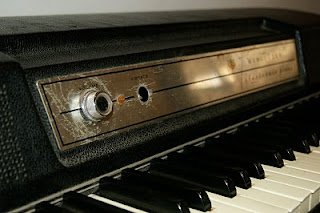 The first Wurlitzer electronic piano appeared in the second half of the last century in the U.S.A. The idea came from an early invention of Benjamin Meissner. In the 1930s, he used an electrostatic pickup to amplify the sound of a traditional piano and this system was used first by the Everett Piano Company. Later, in the '50s, the Wurlitzer Company bought the patent of the invention of Meissner, finally changed the strings of the piano for the (now) famous metal reeds and, in 1955, the first Wurlitzer electronic piano was put on the market. 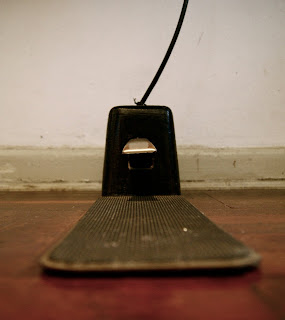 The operation of a Wurlitzer is very simple. Well, actually not as simple as a Rhodes electric piano, but still very simple: one key activates a hammer - almost like the hammers of a traditional piano, but smaller - which hit a reed made of metal whose sound is picked up by a huge electrostatic pickup and the signal is pre-amplified and amplified inside the instrument. The piano also has a sustain pedal that also functions in a simple manner: a lever pressed by the foot creates tension in a cable that in turn triggers a mechanism similar to the sustain pedal of a traditional piano.

The Wurlitzer model 200 appeared in 1968 and the 200A (the best known of several models made by the company) in 1972. The 200A is lighter than previous models (a little over 56 lbs.) without the legs, without case and without the pedal. The extension of the 200A keyboard is 64 notes, ranging from A (equivalent to the second A of conventional piano) to C (equivalent to the penultimate C of a conventional piano). The manufacture of the 200A lasted until 1982 and it was sold in black and green colors (there are some 200A in white, like those used by Supertramp, the Beach Boys and the Carpenters, but these were customized versions on request, were not usually marketed). In 1978 came also the 200B model, but these new piano did not have many innovations. It was visually identical to the 200A, but could be powered with a rechargeable battery. It also had no amplifier or internal speakers. I've never seen in Brazil none of the other models, although I know about 10 people (including this astronaut who writes here) that have a 200A. 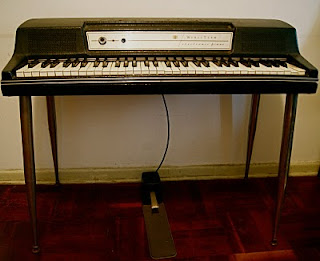 Many artists and bands used (and still use) a Wurlitzer piano, I can give an almost infinite list of recordings. The world's most famous are Supertramp (the sound of the piano is often confused with the sound of the band itself as we can hear in classical tunes like "The logical song", "Dreamer" and "Breakfast in America", among many others. Also the band was, without any doubt, the main disseminator of the Wurlitzer pianos during its existence), Pink Floyd ("Money", "Breathe," "Time" and "Have a cigar"), The Archies (on the famous "Sugar sugar"), the canadian band Klaatu ("The love of a woman" and "Paranoia"), The Kingsmen ("Louie, Louie"), the Seeds (virtually all their songs were based on the sound of the Wurlitzer piano or the Farfisa organ), Joni Mitchell ("Woodstock"), Bob Dylan ("Till I fell in love with you"), Ringo Starr ("I wanna be Santa Claus", Wurlitzer played by Jim Cox)), Carpenters ("Top of the world"), The Doors (the beautiful "Queen of the highway" - from the album "Morrison Hotel/Hard Rock Cafe" - and "Crawling King Snake - from the album "LA Woman") Elton John ("Lady Samantha" and "Heart in the right place"), John Lennon (on "How do you sleep", among others), Gentle Giant ("Proclamation"), Paul McCartney ("Ram on"), George Harrison (on the song"All Those Years Ago" the Wurlitzer was played by Al Kooper), Queen ("You are my best friend", from the magnificent album "A night at the opera"), The Rolling Stones ("Miss You"), Steely Dan ("Do it again" among many others), Stevie Wonder ("Love having you around", "Sweet little girl" and "Tuesday heartbreak") and Sun Ra (on several tracks, including the first use of a Wurlitzer piano in the history of music, recorded in 1956). 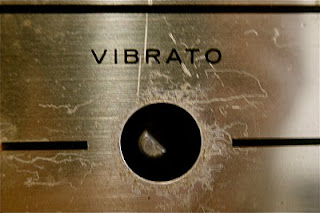 I bought my Wurlitzer 200A from a citizen whose name I do not remember, I think it was Edson - or Edson the name of his band's guitarist, who was present at the time I picked up the piano. I know they both played together in a very famous band in Rio Grande do Sul called "Musical Impacto." I bought in 1997, while recording the album "Era uma vez um gato xadrez" of Acreticine Atray, a band that I played at the time. I remember that I recorded my piano in a song or two, as we were finishing the recordings. At the time I came to take him to some shows, both of Acretinice and other bands and artists that I played with. When I bought it, the piano was full of termites and I disassembled it entirely to reform and paint again! I already bought without knob vibrato with one or two blades broken, but many more have been breaking over the years. It is hard to find (both as a Wurlitzer reeds round) but I found a store in the U.S.A that sells reeds and another parts from Wurlitzer piano (and Rhodes) by the internet so I bought the missing reeds and the knob too (the photos you can see here were taken before I put the knob I bought). You can check and buy it on www.vintagevibe.com 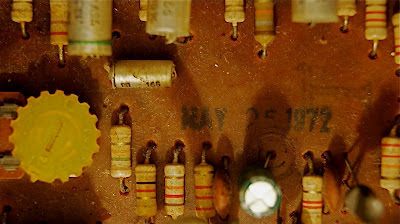 Some curious facts about the Wurlitzer electronic piano:

- The "electronic" in its name was used to differentiate it from an "electric piano" previously manufactured by Wurlitzer. It was an instrument very interesting called "Orchestrion", dating from early last century! Search on the internet about the "Orchestrion" and you know about a great machine created by the human being. In my opinion, it is one of the most curious and innovative instruments made before the invention of the synthesizer, creating the concept that years later would lead to full automation and synchronization between musical instruments (and the whole concept of MIDI)!

- Wurlitzer was very well known for its pipe organs and jukeboxes before becoming world famous for the electronic pianos. 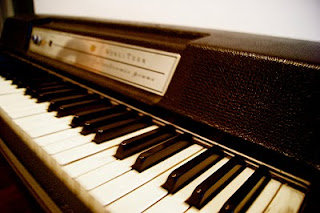 
I recorded this video with a short demonstration of my Wurlitzer on March 30th, 2011!

And here are some videos of bands and artists playing on a Wurlitzer electronic piano:


Klaatu - The love of a woman (1981) - The Wurlitzer piano on this track was routed through a Leslie speaker rotating at slow speed to produce a doppler-like effect:


John Lennon on a white Wurlitzer and Yoko Ono on a black Wurlitzer playing "Instant Karma" live in New York on august 30th, 1972!!!


I also used my Wurlitzer on the track "Fly-by-wire" from my third album, "Zeitgeist/propaganda"


Here you can watch a video of a version of "Fly-by-wire" recorded by Naomi (from the band Quick White Fox):


And - finally - me, playing my Wurlitzer as a guest musician with Justa Causa, in a brazilian TV show called Musikaos (june 23rd, 2001)