Moog "The Source" (text in english) 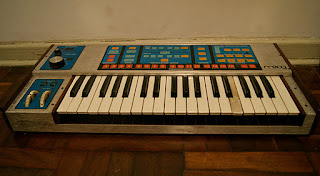 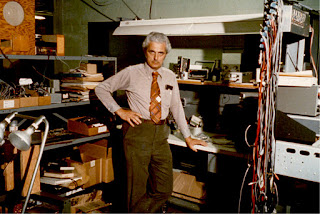 In the late '70s and in the early '80s Moog Music began to lose space on the market to new companies or companies that were begining to invest in the newest technological trend: the digital synthesizers (of course, in my opinion, time would prove that the digital synthesis could never replace the analog synthesis but, anyway, the world of music was begining to become digital). In those days the big deal was to make cheaper synthesizers since almost every band and artist in the world had incorporated the figure of the keyboard player (and its synthesizers) to their records and live performances. The first two years of the '80s were also the last two years of Music Moog until 2002, when Robert Moog got back the rights to use the name Moog instead of Brig Briar as his brand name and to control Moog Music again (the company that he had sold in the second half of the seventies).

However, as a "swan song" worthy of the name that the company had constructed and honored for more than a decade, the last two years saw the release of two products that, over the years, became so legendary for lovers of analog synthesizers and all equipment developed and manufactured by Moog Music: the Moog Memorymoog and "The Source". 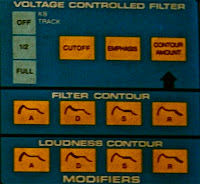 The process of sound synthesis of the Moog "The Source" is very similar to the Moog Prodigy: two oscillators (each with selector for three waveforms in three different octaves) and the traditional 24 dB per octave Moog filter Moog. In the envelope sections for the VCA and for the filter, things start to differ slightly, with "The Source" adding separate buttons to control Decay and Release (Prodigy has just one knob to control both Decay and Release). The rest of the controls of "The Source" differs completely from Moog Prodigy, "The Source" a more complete machine: it has a full keyboard 3/8 (37 notes - Moog Prodigy has only two and a half octaves) plus sequencer, arpeggiator, sample and hold and internal memory to 16 fully programmable patches (which could be saved on cassette).

The front panel controls of "The Source" are very simple to access, all through the membrane panel and a large dial, which has a numeric display that let you know how much the parameters are modified. Another display located above the volume knob shows the number of the progammable patch is currently being used. Wheels to control Pitch and Modutation, along with buttons that change the octave of the instrument and an LED that varies with the speed applied to the Modulation Wheel, complete the front panel of "The Source". On the back there's a knob for tuning the instrument, an output jacks for audio, CV input/output , S-trigger input/output and a connector to the cassette where the sounds could be stored. All beautifully arranged in a aluminum chassis and the coloured membrane panel already mentioned before. 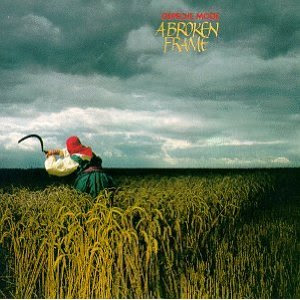 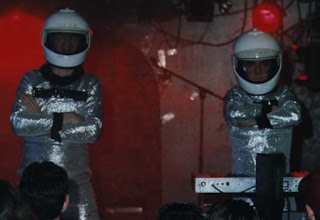 Among some bands and artists who used the Moog "The Source" I mention The Moog Cookbook (from my friends Brian Kehew and Roger Manning Jr.), New Order (the bass line of "Blue Monday" was recorded with one Moog "The Source"), Devo, Vince Clarke (he still has one, the same one that he used to record "Speak & Spell", the debut album of Depeche Mode), Andrew Fletcher (used on Depeche Mode's second album, "A Broken Frame", released in September 1982 - there are several videos of Andrew using these instrument on TV appearances at the time), Ultravox, John Foxx, Gary Numan, Oingo Boingo, Tangerine Dream, Jan Hammer, Tim Simenon (the man behind the "band" Bomb the Bass), Kitaro, The Cars, King Crimson (bassist Tony Levin used one in their 1984 tour. He also used on with Peter Gabriel on the "Secret World Tour", 1993), Blur, EMF, Air, Roger O'Donnell (from The Cure). 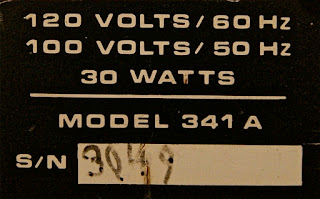 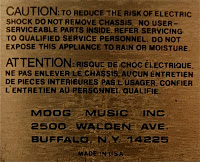 I bought my Moog "The Source" in the late '90s. I don't remember the year exactly but I know it was before 1998, because I used on Acretinice Atray's album released early that year. Since I bought it, my Moog "The Source" worked and stopped, worked and stopped a lot of times. I used it on my three solo albums and at least in one show I played with Jimi Joe, in his solo album's release, in Unisinos' theatre (São Leopoldo, Rio Grande do Sul, Brazil). Cosmetically, my Moog "The Source" is very beautiful and I intend to make it work permanently soon! This is one of the few instruments that I bought in the '90s that my good friend Emilio Benvenutti will not remember (because he was not with me when I went to Viamão, a city near Porto Alegre) to buy it. Before I bought this synthesizer, it belonged to a ballroom band, almost like 99 percent of vintage instruments that have. The serial number of my Moog "The Source" is 3049, so I think it was not only one of the last "The Sources" made but also one of the last instruments made by Moog Music in its golden years. When it was manufactured, in the early '80s, Robert Moog was already working for another instruments manufacturer and, at that time, had no rights to the name Moog Music (a fact that he wisely reversed in the years of his life). As I wrote earlier in this text, all the bad things can have a good side and the end of Moog Music activities at that time (and, therefore, the instruments manufactured by them becoming "obsolete" for many years that followed), allowed me to buy some of those relics for a price that today - with renewed love for analog sounds - to sound like a joke (I remember very well that I paid the equivalent of U$ 25 for my Moog "The Source"!). Long live Dr. Robert Moog: the person who allowed me to be a happy man using the instruments he created and gave me the chance to know his history and legacy!

I found these ads from the time that the Moog "The Source" was released: 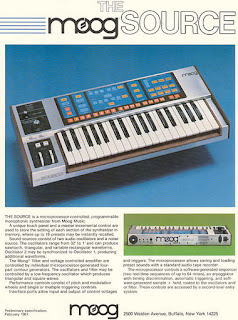 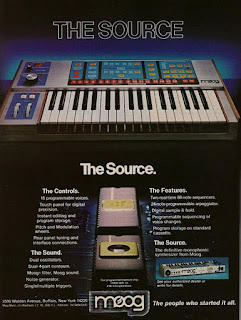 Also found a guy in the USA that resolved membrane problem from his Moog "The Source". 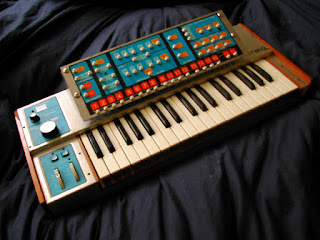 As my "The Source" is not working, I didn't record any video demonstrating it but I found this one on youtube:

At the end of my song "(Welcome to) The Central Lab (to Dr. Robert Moog and Peter Zinovieff)", I used the sequencer of my Moog "The Source", recorded when the instrument was still working (of course!):


Here's a video of New Order playing Blue Monday "live" on Top of the pops, 1983 (Stephen Morris playing "The Source"):

And HERE is an article on sound on sound magazine, about the instruments used on Blue Monday!!!

Daniel Elfman's band Oingo Boingo used one in their "Private Life" video (it appears on 1:03):

Roger O'Donnell shows off his Moogs:


"Shaking the tree", from Peter Gabriel's Secret World Tour DVD, 1993 (Tony Levin used a Moog "The Source" in this tour):