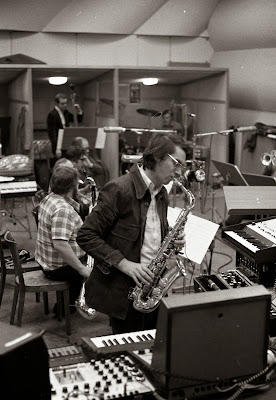 Bruno Alexander Spoerri was born on August 16th, 1935 in Zurich, Switzerland. He studied piano for a while, but changed to saxophone early in his youth, and it was playing the saxophone that Bruno Spoerri played with many jazz bands in Switzerland. Bruno attended the University in Basel and Zurich, studying Psychology, and after his graduation he worked as a psychologist and career counsellor. In 1964 he was invited to a job in an advertising agency and began to work with electronic music using a Ondes Martenot and, after, using lots of synthesizers and also experimenting with electrified/synthesized saxophones. 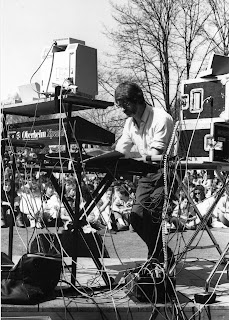 In 1970, Bruno Spoerri recorded the album "Jazz-rock Experience" with one of the bands he took part of, playing saxophone and synthesized saxophone. Interested in the synthesizers made by English company EMS, in the early seventies Bruno purchased a VCS-3 and one of the few Synthi 100 made by the company. In 1974, he recorded the album "Iischalte (Switched-on Switzerland)", a nice and funny electronic music album, recorded with lots of synthesizers. On "Voice Of Taurus" (1978), Bruno Spoerri experiments a lot with electrified wind instruments and also with jazz-rock and rock. In 1981, Bruno and former CAN's keyboard player Irmin Schmidt recorded an album together - "Toy Planet"- released via Spoon Records. Bruno is co-founder of the "Swiss Society For Computer Music" and from 1985 to 2000, Bruno was co-director of the "Swiss Center For Computer Music". The album "Gluckskugel" was released in 2006, with music composed and recorded by Bruno Spoerri from 1971 to 1980.

I contacted Bruno Spoerri via email some weeks ago, right after I interviewed Joel Chadabe on last August. In his interview Joel told that they worked together in some occasions. Bruno was very kind to accept my invitation to this interview, and I am very proud and grateful to have the opportunity to have contact this great pioneer of electronic music from Switzerland. Here's the interview! 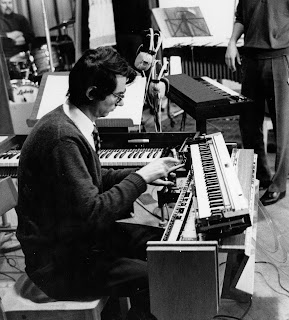 ASTRONAUTA - Bruno, what were your first steps in music, first instrument you've learnt and first musical influences? How and when did you become interested in electronic music? 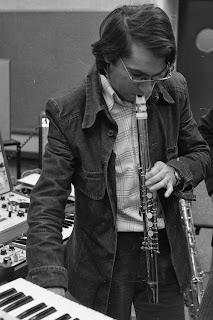 BRUNO - About 6 years old, I started with piano, but after a frustrating experience with a rigid piano teacher I looked for another instrument. I found out, that the guitar was not my instrument too, and switched to saxophone. In the years around 1950 be-bop and cool jazz were the jazz styles of the youth, and my idols were first Charlie Parker, then Gerry Mulligan and Lee Konitz. I got quite successful, won some competitions and played with some of the best Swiss jazz musicians. But I was interested in other music too, especially Strawinsky, Bartok, attended many concerts (my mother was violinist in the Basel symphony orchestra), and so 1955 I got into a very exciting concert with Ginette Martenot, playing the Ondes Martenot and Oskar Sala with his Mixturtrautonium. I began to read about electronic music, but there was no way to get nearer to then "ivory towers" of electronic music (especially for a jazz musician). After my finished studied as psychologist I worked as professional counselor, but then I got more and more into arranging and composing, could do the music for some small films. End of 1964 the boss of a advertising agency called me and offered the job of a "Tongestalter" (today we would say sound designer) in his new film company, producing mostly commercials for TV. I accepted, and had to produce a lot of music with small money, and we were in heavy competition with other companies. So I remembered the contact with electronic instruments and brought the only instrument , that was available then, an Ondes Martenot. And with this instrument I began to produce jingles, scored some documentary and experimental films and used it in my jazz group.

ASTRONAUTA - Do you still have and/or use analog synthesizers?

BRUNO - Most of my analog gear is sold (most of it to the remarkable Swiss Synthorama of Martin Hollinger), but I still have my first synthi, the EMS VCS-3 (from 1970), the ARP 2600 with sequencer and the Lyricon I and II. I use the lyricon quite often in performances, the other gear mostly for demonstrations to visitors. 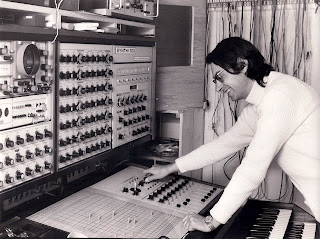 ASTRONAUTA - In the early seventies you purchased an EMS Synthi 100, and I think you're one of a few persons who had one of those synthesizer systems. How and when did you buy that EMS Synthi 100? Do you still have it?

BRUNO - I bought the Synthi 100 in 1971. In 1987 I gave it to Felix Visser (Synton) in exchange for a Fairlight CMI; some years he had to sell it at an auction, and I don't know where it is now (I would recognize the instrument, as I did some small changes on it).

ASTRONAUTA - Also in the seventies you've experimented with electrified saxophones. What was the process you used to electrify your wind instruments?

BRUNO - As a saxophonist and jazz improviser I always looked for ways to play without a keyboard. In 1967 I got the chance to try the Selmer Varitone, but (it was too expensive) I switched to the Conn Multivider and later to the Hammond Condor. I used the Multivider in many concerts (1969 we played at the Montreux Jazz Festival with our jazz-rock group, and there I met Eddie Harris). In 1972 I began to use the EMS pitch-to-voltage-converter with the saxophone in concerts (with the VCS-3 I could do 3 part harmony and even come counterpoint melodies), and in 1975 I saw an ad for the Lyricon and ordered one immediately.

BRUNO - Well, I wrote a book (Musik aus dem Nichts, Geschichte der elektroakustischen Music in der Schweiz) that covers the whole story - alas, it is only in German, as nobody was willing to translate it. Most of my jazz colleagues hated electronics (but they, too, hated jazz-rock). In the commercial world, on the other side, I had a lot of chances: I could do TV-shows, signature tunes for TV, a lot of film music, some LPs (e.g. for Erich von Däniken) etc. 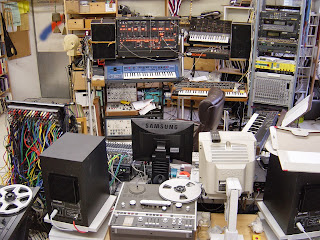