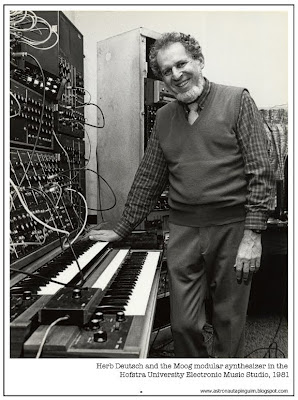 Herbert Arnold Deutsch was born on February 9th, 1932 in Baldwin, New York. He and his mother realized very early in his childhood that music would be very important in his life, so he began to play piano lessons at age 4. At 11 he started to play trumpet, influenced by jazz. He played in bands throughout high school and college and after graduation he entered a U.S. army band (Herb had the jazz musician Wayne Shorter as a band mate during this period), continued to study, graduated with two degrees in music and, in the early '60s, became a professor at Hofstra University, where he still works for more than 50 years. 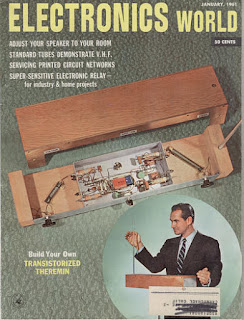 In 1963 Herb Deutsch met Robert Arthur Moog at a conference of the NYSSMA (New York State School Music Association) in Rochester, NY. The year before, Herb had built a Melodia model theremin, from an article written by Robert Moog on “Electronics World” magazine, in which Bob explained step by step how to assemble the theremin and this was the initial subject of conversation between them. The ideas evolved very quickly, and they decided to work together in a project to build a sound synthesizer, based on the principles of voltage controlled that were already being developed by Bob. In 1964 they designed and assembled the first prototype of the Moog synthesizer and, among other things, it was Herb who insisted on the idea of using a keyboard similar to a piano, because it would be more practical to composers and it would also help to increase the sales of the new instrument. And how it helped! In 1968 Wendy Carlos recorded the first album of classical music performed entirely on the Moog synthesizer ("Switched-on Bach") and it boosted the sales of the instrument and MOOG became synonymous of modernity and changed the whole history of music. 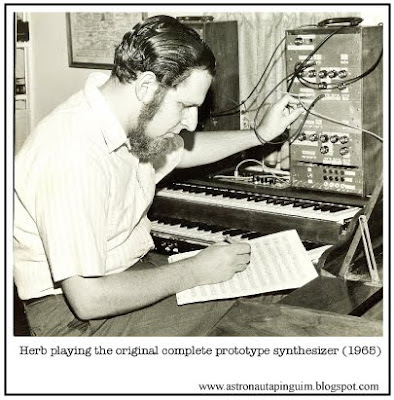 Herb not only worked actively with Bob Moog in the invention and development of the instrument but also was one of the main artists that used one of those, especially in the early years of the Moog synthesizer. He composed the first composition ever made on a Moog ("Jazz Images, worksong and blues", 1964), performed the first live concert using the equipment (with the "NY Improvisation Quartet" at Town Hall, NY, in September 1965) and also conducted and played with his quartet in the famous concert "Jazz in the Garden" at MoMA (the Museum of Modern Art, NY, on August 28th, 1969). that was the first time in which four Modular Moogs were used at the same time on stage. In the '70s, Herb wrote some jazz-rock pieces and one of his most well-known compositions of that time is "Lost your number", based on a phone number (each note played on the main theme corresponds to a digit of the phone number!). 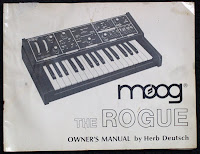 Parallel to his career as a composer and his work as a music educator at Hofstra, Herb taught in several other institutions. Between 1979 and 1983 he worked at Moog Music, as the Director of Marketing and Sales (he developed and wrote the manual of the Moog Opus 3 synthesizer - released in 1980 - and he also wrote the manual of the Moog Rogue synthesizer - released in 1981 - and the Moog Vocoder - released in 1979). In 1972, Herb founded (with composer Marga Richter) the Long Island Composer's Alliance, one of the oldest collective of composers from the United States (Herb is currently L.I.C.A.’s president).

I contacted Herb Deutsch for the first time about a year ago, to check about the possibilities of bringing him to Brazil for lectures. And, of course, I wanted to make contact with one of my greatest superheroes. My friends Michelle Moog-Koussa (Bob Moog’s daughter and president of Bob Moog Foundation) and Brian Kehew (a great musician, producer and writer who is currently the Archives Historian for the Bob Moog Foundation) put me in contact with Herb for the first time and, since then, everytime I write an email to Herb he promptly replies as soon as his very busy life allows. I did this interview with Herb via email and I still hope and I'm searching for an opportunity to bring him to Brazil to a lecture. And I hope it can happen soon!!!

Well, let's go to the interview! 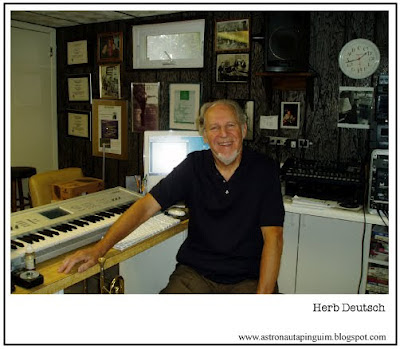 ASTRONAUTA – Herb, I read somewhere that you began your musical studies very early in your childhood. I also read that your first (or your main) instrument was the trumpet, at least at that time. How your interest in the theremin - when you was already 30 years old - and, subsequently, by the synthesizers influenced your music from that time (early 60's) on? Did your concepts about music changed after these electronic new equipments came into your life or the new possibilities opened by that were added to the concepts you've ever had about music?

HERB – I began my music studies at 4 years of age on the piano. When I was 11, I began to listen to jazz and wanted to play trumpet. In school and even later in a US Army Band, I was a trumpet player. Even when I composed "Jazz Images" using the Moog for the first time, I wrote it for a jazz soloist playing both piano and trumpet.

ASTRONAUTA – As far as I know, among your great contributions to the invention of the Moog synthesizer there's the fact that you have suggested to Robert Moog to use a keyboard interface on the synthesizer and you also suggested him that the Moog synthesizer should have "attack" and "decay" controls (later called "Envelope Generator"). There is also a curious fact about the creation of the "Envelope Generator" - the famous story that, during a conversation between you and Bob about that, he asked you to cross the street and buy a door bell in a hardware store and when you came back, in about half an hour Bob had an "Envelope Generator" almost ready. In those early days, did you had daily contact with Robert Moog or, at least, did you went frequently to Robert Moog's workshop? How was this place and where was this workshop where both of you developed your early ideas for that new instrument? 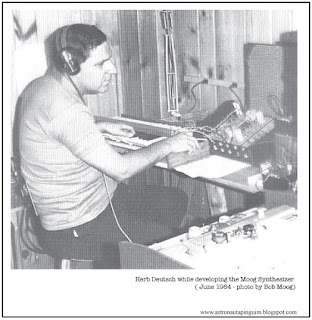 HERB – During the development of the first prototype synthesizer I stayed at Trumansburg camping at a New York State campground with my wife and baby daughter and spent every day of almost three weeks with Bob at his shop and studio. To clarify, the doorbell was the first "trigger" for turning on the envelope generator. That concept became the trigger pulse that was used in all analog synthesizers from that time.


ASTRONAUTA – More than being present and working with Robert Moog when he took his first steps in the invention of the Moog synthesizer, Herb Deutsch is responsible for, at least, three memorable moments in the beginning, when everything was still new and still in testing phase: the first composition made with a Moog synthesizer (the piece "Jazz Images, worksong and blues", written on the fall of 1964); the first live use of a Modular Moog (at the Town Hall, NY, in September 1965, with "NY Improvisation Quartet") and the concert "Jazz in the garden" (at MoMA, in New York, on August 28, 1969, in which were used four Modular Moog Systems simultaneously). What are your memories about those facts? Are there photographs or filming of these two concerts somewhere?

HERB – The NY Improvisation Quartet performed the first true concert using the modular Moog Synthesizer in September of 1965. We performed works of mine and also performed the Stockhausen "Refrain Fur drei Spieler" (without the Moog for that piece). The September concert was of great interest to critics, but was performed exactly when a NY Newspaper work strike took place, and it was never reviewed except by one music radio station which was very complimentary. The Museum of Modern Art concert that took place in August, 1969 was an exciting and spectacular event for thousands of fans, but was generally less than spectacular for the musicians. The four modular synthesizers were not completed until the day before the concert and were rushed down to NY City and set up in a hotel. That forced the only real rehearsal to be held the night before the concert with 8-10 people playing on instruments that they never touched and had no idea about the operation of them! I had put together a jazz quartet which included the great jazz pianist Hank Jones. He performed on an instrument that was basically THROWN together. The other group was made up of performers more from the FREE ROCK & ROLL world. As all know, the audience was actually pretty stoned, loud and very excited. The performances were about as good as could be expected and the closing turned out to be a DYNAMIC SUCCESS. At the very height of a free improvisation (as the entire evening was) one of the audience members trying to capture a photograph, i've been told, stepped onto the ONLY power plug and threw the evening into surprise black out of sound and light! It was spectacular!! The reviews however were not very kind to any of us. I may include a very rare photo from that night if I can locate it.

ASTRONAUTA – I think the Moog synthesizer is one of the greatest creations of the mankind. I also think that the technology used in analog synthesizers was underexplored in comparison with the possibilities that could have been taken forward. In the eighties, with the emergence and popularization of digital instruments, analog synthesizers were losing ground and it took about 20 years before Robert Moog got the rights to use the name "Moog" again and, from that time on, the instrument became popular again. How do you see, having participated actively on the birth of Moog synthesizers, this “rebirth” of the factory and the resulting growing popularity of the brand Moog again?

HERB – I have been very pleased with the work that has been done by the new MoogMusic Company. They have retained the musical ideas of the original instruments, they have retained Bob's love of Theremins, and they are moving creatively into the world of digital apps.

ASTRONAUTA – I watched a very interesting video on youtube, from one of your presentations ("From Moog to Mac"). Do you do this presentation with some regularity? Do you have interest or would be interested in bringing this lecture/presentation to other countries?

HERB – I give the lecture-performance of MOOG TO MAC fairly often and frequently change some of the music that I play. I will be releasing an Enchanced CD on Ravello Records in May which includes links to some nice perfomance of mine. I am also on YouTube, of course. Check under Herb Deutsch and Minimoog for a very well produced 14 minute video which is getting a lot of hits.

Well Astronauta, here are a few comments for your interview. In a seperate email, I will send a few pictures. They will also appear on the upcoming "Moog to Mac" Ravello CD. 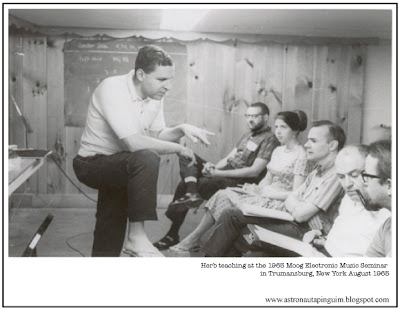 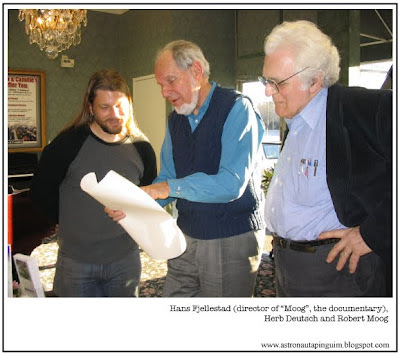 Here's a very rare photo of the "Jazz in the garden" concert that Herb gently sent me to illustrate our interview: 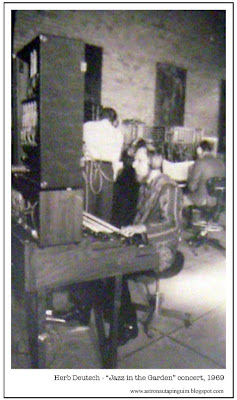 "Here is the MoMA photo. The synth that I am playing was later sent to Keith Emerson!!! The man standing is talking to Hank Jones, who can barely be seen and to his right is Art Doolittle who is playing the bass synthesizer. The percussion synthesizer is not seen, but the player was Jim Pirone." - Herb Deutsch.