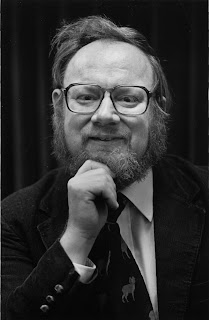 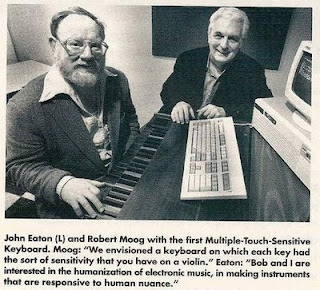 Born on March 30, 1935 in Bryn Mawr (Pennsylvania, USA), the composer John Eaton began his musical career watching his older brother play the piano, when he was a child. He began to take piano lessons and when he was only nine years old he made his first concert, playing Beethoven sonatas. In 1957, at age 22, John graduated in Princeton University. In 1959 he moved to Rome (Italy) and lived there in the following years. There he began a long time partnership with clarinetist Bill Smith and formed a band with him. Their band recorded two albums and made several concerts in Europe and in the United States. It was also in Rome that John Eaton met the electronic engineer Paul Ketoff, inventor of the famous and legendary Syn-Ket, in 1964. With the Syn-Ket, John Eaton has performed more than a thousand presentations around the world and was at before one of these presentations, in 1966 at Columbia University, that he met Robert Moog, who fixed the Syn-Ket, damaged during a flight, and also built a Moog synthesizer especially for Eaton! The partnership of John Eaton and Robert Moog also created the Eaton-Moog Multiple-Touch Sensitive Keyboard (which John briefly explained in the interview below).

I knew the music of John Eaton recently, during my researches on the pioneers of electronic music, and I searched for his contact and sent him an email asking about the possibility of an interview. John not only accepted my invitation but also was very quick and gentle replying in me! And here's the interview with the great John Eaton! 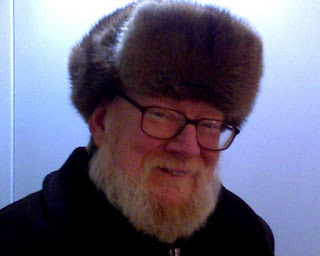 ASTRONAUTA - How did your life in music begin? And how did you become interested in electronic music?


JOHN - I began composing when I was very young - before I played an instrument actually. It was the depression.  My older brother was taking piano lessons.  I stood by him as he practiced and learned the notes by looking at his music.  I thus wrote three (probably terrible ) piano sonatas before my parents decided they could afford to give me piano lessons right away! I gave a concert at a local resort, Buck Hill Falls, when I was 9, playing the four best known piano sonatas of Beethoven.  Then, I stopped practicing and started playing jazz.  Yet, all the time, I kept composing.


I first became interested in electronic music while a student at Princeton of Milton Babbitt, Edward Toner Cone, Earl Kim and, mainly, Roger Sessions. But, I was always a klutz in tape studios.


ASTRONAUTA - The jazz musician Bill Smith was a great friend of yours and one of the first persons you met when you moved to Italy in the late '50s/early 60's. Could you tell us a little about the period you played with him? Is there any record/film/photograph of that time? 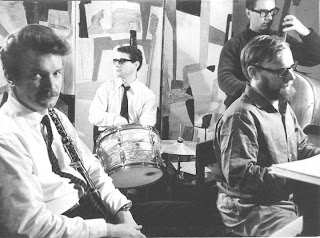 JOHN - Bill (William O. Smith) was not a pianist, but a magnificent - the best in my opinion! - jazz and classical clarinetist.  We had a group in Rome that toured Europe and the USA doing concerts of contemporary music, jazz, and especially, both on the same program. We met the fall of 1960 and immediately began performing written compositions, jazz and other music together around Italy, and then for Columbia Artists in the USA.  We recorded 2 jazz albums, one for RCA Victor, New Sounds: Old World with Erich Peter and Pierre Favre, and one for Epic, New Dimensions with Richard Davis and Paul Motion.  In addition I had done two earlier ones in the mid 1950's for Columbia, College Jazz: Modern, with a group of Princeton undergraduates, and Epic, Far Out: Near In with Herbie Mann, Bob Prince, and others.

ASTRONAUTA - How did you meet Paul Ketoff and what was your contribution in the development of the Synket? What kind of special features you asked him to do on the Synket to make it a performance instrument and not only a studio instrument? For some time you used both the Synket and the Moog synthesizers on your performances. What were the main differences between the two instruments?

JOHN - I met Paul Ketoff in 1960 (I believe) when the Composer-in-Residence at the American Academy, Otto Luening, and a group of the fellows interested in electronic music, George Balch Wilson, William O. Smith, and myself, asked him to build us a small classical tape studio.  He showed up one afternoon with the Syn-Ket.  I immediately exclaimed, "But, Paul.  This is not just a group of components of a classical tape studio; this is an instrument!"  I immediately began writing short pieces that could be played on it, without any pre-recording and asked him to build me one that could be modified for better use as an instrument.  At my suggestion, he modified the three keyboards so they would respond to velocity, like a piano, and sideways motion, as in a clavichord's bisbigliando.  Over the next few years, he added an overall volume pedal, a white or pink noise generator, alternate basic sonic material, a spring reverberation unit, and other various types of modulation.  (I must quickly add that I have very little technical knowledge of electronics, and all the designs were entirely Paul's inventions.)

To my knowledge, after a few solo Syn-Ket essays of mine, the first piece written involving live performance - without pre-recording or tape studio manipulations - for a modern electronic sound synthesizer, by which I mean one that involved voltage control, was my Songs for R.P.B.  It was at the Villa Aurelia of the American Academy, and involved the remarkable singer, Miciko Hirayama, the pianists Jane Schoonover Smith and myself.  The two performers on the Syn-Ket were Paul Ketoff and Otto Luening on that occasion.

Here is a photo of Paul and myself presenting yhe Syn-Ket to a group of mainly Italian musical illuminati  in, I believe, 1963 or 1964: 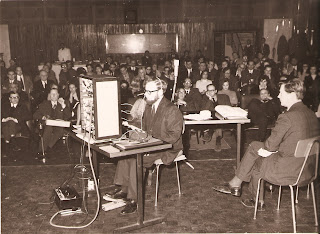 Between this and 1970, I made my living primarily as an electronic troubadour, giving approximately 1,000 concerts on the Syn-Ket and a special Moog Synthesizer Bob put together for me (see below) in most European and American countries, and under such auspices as the Venice Festival, the Hamburg Opera and Nord Deutscher Rundfunk, Tanglewood, the Los Angeles Philarmonic, many major colleges in the USA, USIS, and a Russian tour sponsered by the Soviet Composers Society.  I recorded two albums for American Decca which involved the two synthesizers: Microtonal Fantasy and Electro-Vibrations.  Some of the material recorded is available on a CD released by the Electronic Music Foundation called First Performances.  This also includes two short improvisations on the Syn-Ket with a rock rhythm section: Blues Machine and Bone Dry.  Someone told me this was to his knowledge the first use of a modern synthesizer in Rock. There is a picture of me with the Syn-Ket which appeared in Time Magazine in 1968, in the booklet with this CD.

ASTRONAUTA - How did you meet Robert Moog and how do you see Bob's legacy to the world of music?

JOHN - I first met Bob Moog on a 1966 concert tour in the USA involving the Syn-Ket.  I had a concert at Columbia University.  During the flight over, something juggled loose.  I could usually fix most routine problems; but, this was more serious.  I called a good friend from Rome who had settled in the US and was teaching at Albany, Joel Chadabe.  He said the only person he know who could fix it was Bob Moog, who at that time lived in Trumansburg in Central New York State.  I loaded the Syn-Ket into my 1956 yellow Cadillac, and took off for Appalachia!


Bob, one of the most generous people I've ever known, met me around noon, became fascinated with the Syn-Ket, and worked on it all night.  At the end, it was in perfect condition again!


During the evening, we entered a conversation which changed my life.  In earlier electronic music, the one element I almost always found missing was human nuance.  I believed that would only enter if composers had more control in performance over the various aspects of electronic music.  I asked Bob if he could design a keyboard that would allow much more control over all aspects of the musical continuity.  I suggested that each key have four different sensitivities, derived from keyboard and string instruments: 1) the amount a key is depressed; 2) the front-to-back position on the surface of the key; 3) the side -to side position on the surface of the key; 4) the amount of pressure added to a completely depressed key.  (Later, Bob was to add the amount of area a finger covered on the surface of a key.) These sensitivities should be able to be applied to any aspect (parameter) of the music made available by a dedicated computer.  A larger touch-sensitive plate on the side of the keyboard could make the x, y and z axes of each key applicable to general control of the musical continuity.  Banks of dual-action pedals applied to each keyboard could also control more general aspects of the music.  You, of course, wouldn't have to use all of the sensitivities at once.  And you should be able to change how the system works instantaneously.  That very night, the Eaton-Moog Multiple Touch Sensitive Keyboard was born.


But with all the changes in miniaturization, mostly coming from the space program, it took some 25 years until a performable instrument was produced.  We were aided by a grant from Indiana University, shortly after I joined the faculty there in 1970, which was later picked up by the University of Chicago, where I went in 1991.  Bob built many versions of a key, then an octave keyboard.  I performed on it in 1991 at Mandel Hall of the Universiyt of Chicago, and again for the Music Critics National Conference where my piece Genesis was televised.  A part of this performance and concert was shown as a news item on CNN in 1992.


In the meantime, to enhance my musical activities, he gave me a two box unit consisting of a couple of sequencers and a number of sound producing and modifying units.  These can be heard on the CD "First Performances", particularly in Duet and Blind Man's Cry.


Bob's legacy to the world of music is incredibly deep and profound.  He gave the world of music, truly viable instruments for the live performance of electronic music.  He, and Paul, both were eager to give musicians of all sorts, what they needed - not what would simply make a buck.  They remain noble lights in the oft-times sordid world of music.

ASTRONAUTA - Please, tell us about your opera works and the Pocket Opera Players project. Do
you still perform live concerts? Do you have plans to release (or re-release) your recorded material? 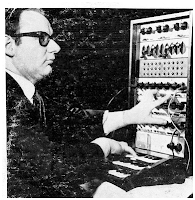 JOHN - The Pocket Opera Players were founded in 1991 with the performance by the New York New Music Ensemble, which constituted the instrumentalists of the group, for about 15 years.  There is a lot of information about it on my somewhat out-of-date web site, www.pocketoperaplayers.org

Basically, instrumentalists are always involved in our performances as characters in my operas - they act, speak, sing in non-operatic fashion, even perform gymnastic feats while playing their instruments.  We use projections and props, nit expensive sets; costume elements, not costumes.  Our Pocket Operas proper usually have a small group of singers in the major rolls.  But, we also do Romps for Instrumentalists, another form of Pocket Opera in which the players perform all the characters parts.
I have written over a dozen of these Pocket Operas. A commercial DVD of "The curious case of Benjamin Button" will soon be commercially available from Albany Records.
As soon as the project is finished under the guidance of Bob Moog's first professor at Columbia, I intend to concertize again, using the Eaton-Moog Multiple Touch Sensitive Keyboard.  I would like to re-release my earlier recordings in a CD format. 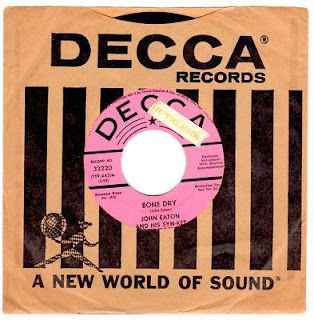 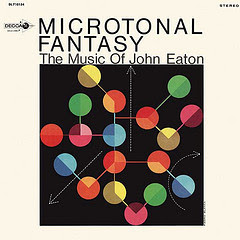