Patrick "Paddy" Kingsland was born in Hampshire (England) on January 30th, 1947. He took piano lessons in his youth and got his first guitar when he was 15. By this time he also built his own valve amplifier and began to play in a band in his school days. After attending Eggars Grammar School in Alton, Hampshire, Paddy joined the BBC. He was a technician there until, in 1970, he had the chance to join the BBC Radiophonic Workshop, the famous department that was responsible for providing the soundtrack and sound effects to BBC radio and TV shows. Paddy worked there for 11 years and created the music for many programs, including "The Changes", "The Hitch-hiker's Guide to the Galaxy" and several episodes of "Doctor Who"!

Even after leaving the BBC Radiophonic Workshop, in 1981, Paddy continued to provide music to some BBC programs, including the documentary series "Around the World in 80 Days" and "Pole to Pole" (both starring former Monty Python's actor Michael Palin). In 1982, Paddy decided to establish his own studios - PK Studios - which he manages since that time. 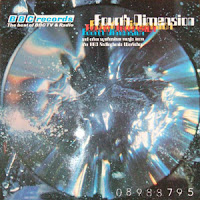 In 1973, BBC Records released the album "Forth Dimenson". Although it was credited to The BBC Radiophonic Workshop, "Fourth Dimension" is the first solo album released by Paddy Kingsland and includes tracks that he recorded from 1970 to 1973, using mainly the EMS synthesizers VCS3 and Synthi 100 (the Delaware). Paddy released two other great albums in the seventies, "Supercharged" and "Moogerama", and many more library music albums in the '80s and '90s, mainly on the KPM record label. Many tracks recorded by Paddy during the BBC Radiophonic Workshop days can be found in BBC Records compilation albums!

I heard about Paddy Kingsland's music for the first time during my researches on Delia Derbyshire, Daphne Oram and the BBC Radiophonic Workshop. In early January 2013 I contacted him (via the PK studios website) and he promptly replied my email! He is a very gentle man and the music he creates, since the BBC days, is awesome! Today is Paddy's 66th birthday, so to publish this interview today is very special to me! Happy birthday, Paddy, and thank you for the interview!!! 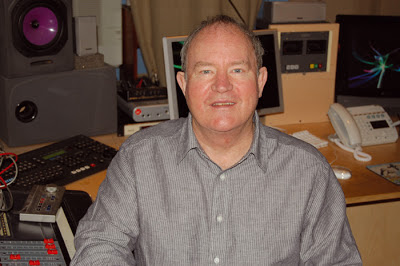 ASTRONAUTA - Paddy, what were your first steps in music and when did you decide to become a musician and composer? When and how did you become specifically interested in electronic music?

PADDY - I began playing the harmonica on the bus on the way to school with mixed reactions from the audience. Also the usual piano lessons until I got a second hand guitar when I was 15. I built a valve amplifier and soon we had a band after school playing instrumentals like 'Walk don't run' and later moved to Chuck Berry songs. When I was working at the BBC as a studio technician I used to experiment with tape loops and echo effects. I got the chance of a working at the Radiophonic Workshop for a week - I thought it was great and soon got to work there full time.

ASTRONAUTA - You worked at the BBC Radiophonic Workshop for 11 years (from 1970 to 1981). What were the equipment and instruments you had to create your music and sound effects during those days?

PADDY - At that time the Workshop had 4 studios, each with a mono mixer and 4 tape machines. There were gadgets to make threading tape loops easier, and some machines had vari-speed, graduated in semi tones to make accurate pitching easier. There were laboratory style oscillators and some elegant looking perspex boxes containing a device to fade between sources mechanically from the inputs in sequence. Then there was a machine which was designed to prevent howl round in theatre PA systems. It did this by shifting the pitch of the audio by a few cycles. We used it to create phasing effects and much weirder sounds when drastically shifting the pitch. There was a tape machine with rotating heads which could change pitch while keeping the speed the same or alter duration while keeping the pitch the same - this was way before digital harmonizers etc. The first synthesizer arrived in 1970 - an EMS VCS3. It was great for learning about voltage control and making sounds, but no good for playing tunes on. The Arp Odyssey which came a bit later was much better for that.

PADDY - Delia was there at that time, she was a lovely lady and I worked with her and Brian Hodgson a lot. Delia was an etherial presence at the workshop, creating bits of magic for all kinds of radio and TV productions.
Synthesizers made the process of making electronic music faster, so there was pressure to produce more quicker even if it wasn't necessary as good. Delia was unhappy about churning out tons of material after having years of freedom to spend as long as it took to create her pieces.
Add to that a few personal problems and, as happens to all of us, keen young people joining the Workshop with new ideas must have been hard for her.
It is a shame that she did not live to enjoy the huge respect for her work that has now become widespread.
I saw her now and again when she left the workshop - she was one of those people you could met after a year and carry on exactly where you left off. The last occasion was at my studio. She came with a friend of Daphne Oram who wanted to transfer a disc of some Daphne's work onto a CD. She was the same as ever but sadly I did not see her again after that.

ASTRONAUTA - Can you tell us a little bit of the recording process of your albums "Fourth Dimension" (1973), "Supercharged" (1974), "Moogerama" (1978) and the albums you've recorded for KPM Music Ltd.? Do you consider the idea of have those albums reissued some day?

PADDY -"Fourth Dimension" was intended to be one side of me and the other of John Baker. John was ill and so I did both sides, re-working theme tunes which started out as 30 second pieces, such as "Colour Radio", "Fourth Dimension", "Scene and Heard", "Take another look". I played guitar and a bass a lot, there was a drummer and bass player on some tracks. I used a mixture of 8 track and 1/4 inch overdubbing. I used VCS3, Synthi 100 and Arp Odyssey plus my old Telecaster. There were 2 albums for EMI, "Supercharged" and "Swag". Before that there was a single called "Spinball" which was also recorded by jazz flute player Herbie Mann. They were both recorded at Abbey Road studios with session players. I overdubbed the synth parts and strings and brass were added later. We had some Arp synths and used a few tape loops, VCS3 effects on "Wobbulator Rock". The late Richard de Sylva and I worked together to make these albums.

"Moogerama" was a library album produced by Syd Dale for his company Amphonic Music, which is still around today. Again we recorded session players at Lansdowne studios and I wrote out parts for them including the synth parts. It was more of a conventional library album featuring synth than an electronic music project.

The KPM albums are still in use, I am happy to say and most of them feature conventional musicians recorded either in my studio or elsewhere.

ASTRONAUTA - You founded your own studios - PK Studios - in 1982, that's right? Do you still use analog synthesizers and/or effects in some of your productions at PK Studios? What were the changes in the equipment you use at PK Studios during these years?

PADDY - PK studios started in 1982. I thought it was time to branch out and work for a variety of clients. I ended up doing commercials, library music and corporate projects while also doing work for BBC TV and Radio. In the early years I also took on recording work to help pay the rent and get the place set up.
I wanted more space that at the workshop, and achieved that with a big control room and studio with enough room for 12 musicians.
My first setup was a 24 track Soundcraft machine with a Soundcraft mixer. A client spilt orange juice over the faders on the first session. I was using an Arp synth and later a Roland Jupiter 8. Next came AMS delays and reverbs also Roland vocoder, chorus, phaser, and flanger. A Linn drum machine arrived next. I got a Q lock synchronizer fairly soon, which allowed me to record to picture with a Umatic tape. This was very expensive at the time and quite stressful to use. But it was great to see things to picture right away, not in the dubbing theatre when it is too late. I used to hire the Emulator I for Dr. Who. Soon after that I got one of the first Otari 90 MTR90 24 track tape machine. This speeded up things a lot in the synch department - the old Soundcraft took ages to lock to picture. Emulators II and III followed, sampling and sequencing to picture. The next big step was Apple mac with Performer software and Professional Composer for notation. An early Digidesign two track recording system was fun but the Radar 24 track was my first proper disc recorder. Then came Protools and goodbye outboard gear, also Mac 5 etc etc, with all the sounds on the hard drive. It has come a long way. Still there is no music without first having ideas. 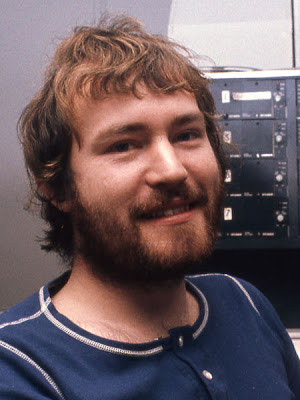 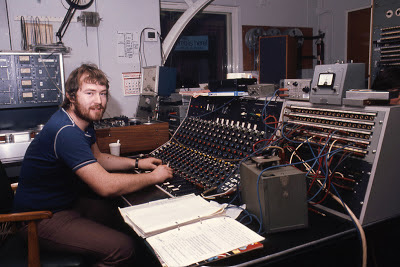 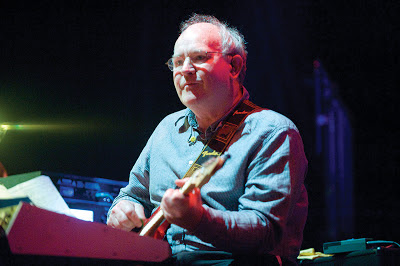