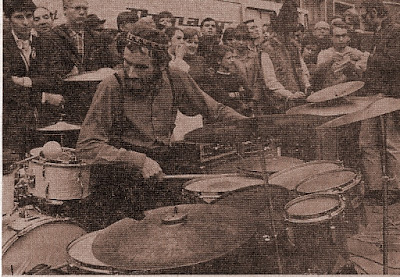 Manfred Neumeier - or Mani Neumeier - was born on December 31st, 1940 in Munich, Germany. He became interested in music and arts during his childhood days. When Mani was 17 years old he began to play the drums at the same time he became interested in Jazz. In 1968 Mani formed the German rock legend Guru Guru, one of the most interesting bands that mixed Jazz, rock and psychedelic sounds. Guru Guru released 31 albums since the band was formed, almost 45 years ago!

Besides being Guru Guru's drummer and frontman, Mani also recorded almost 100 albums with other artists and bands, as a special guest or a band member. This bands includes Irene Schweizer, Cosmic Couriers, Harmonia, Moebius and Plank, AcidMothersGuruGuru, The Paul Kidney Experience among many others! Mani currently plays with Guru Guru and also his solo shows.

I contacted Mani some for the first time some weeks ago. Since the first email he is very gentle and when I invited him to do this interview to my blog he promptly answered saying yes! In my opinion, this man is not only one of the best Krautock drummers but also one of the greatest drummers that ever lived in this planet! And it's a pleasure to have him on my blog. Hope we can see Mani Neumeier playing live in Brazil soon! 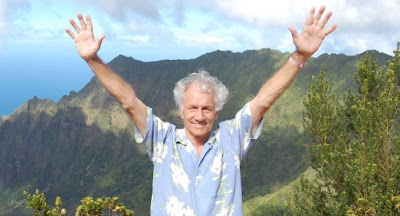 ASTRONAUTA - Mani, how and when did you become interested in music and what were your first musical steps? What were your influences in your childhood and teenage days? How did you start to play the drums?

MANI - I was always interested in music and art since I was a child. Between 8 and 16 I played theater, sketches, etc. I started to play drums with 17. Than one day I heard a record of Louis Armstrong. I was fascinated and I knew - This is my music, Jazz. I went through all styles of Jazz, from Dixieland to Swing, Bebop and finally we found our Freejazz. That was 1965. Together with the great pianist Irene Schweizer and Uli Trepte. Later I formed Guru Guru in 68. We were lucky because in Zurich, Switzerland - where we lived - we could hear all great Jazz masters live. From Louis to Duke Ellington, Mingus, Dolphy, Art Blakey, Max Roach, Thelonious Monk, Miles Davis, Coltrane, Ornette Coleman and all. This were my "teachers". I went to every concert and picked up as much as possible. I wanted to get like one of them. 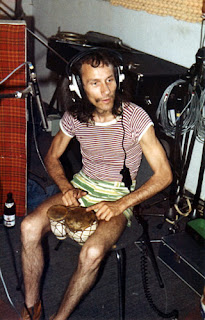 ASTRONAUTA - Guru Guru is a very well known band, not only because of the great music you created but also because of the political involvement of the band. How was to be politically involved in the German of the sixties and early seventies?

MANI - At first there was the music. And we lived as a commune. In the Odenwald, near Heidelberg-Frankfurt. Every member had to live in this house, play only with Guru Guru, no other work was allowed! Sometimes we worked together with the SDS (left wing student org.) and had concerts in the university and also played in prisons. We made a sound like nobody else. A strong, magic sound, a power trio, space sound, acid rock, underground - later called "Krautrock". And after 45 years we are still on tour and kicking!

ASTRONAUTA - You're one of the most well known drummers in Krautrock - I don't know if you like this term, "Krautrock" - but besides being the drummer and the frontman in Guru Guru, you're credited as the keyboard player in some of my favorite Guru Guru albums. What were the equipment you used to play/record in those albums?

MANI - In the beginning I did not like the term "Krautrock". But now I don't care, it became quality term in foreign countries.
Of course I am a drummer, but also singer, percussion player, and sometimes synthesizer player. 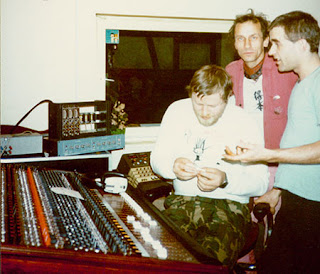 ASTRONAUTA - In 1975 you played the drums n Harmonia's album Deluxe. How was the recording process of that album? And how about Zero Set, the album you've recorded with Conny Plank and Dieter Moebius in 1982?

MANI - The Harmonia Deluxe album we recorded in the old big countryhouse of Möbi+Michael Rother (+Roedelius), together with Conny Plank. It was like Summer holidays. The album "Zero Set" was in trio with Möbius, Conny and me at Conny's studio near Cologne. This was the most intensive and groovy electro/acustic studio sessions I ever had. I played most of the sequencer stuff and drums + special effects on this LP. Great fun! Zero Set is still famous at Japanese DJ's!!

ASTRONAUTA - You play in a lot of interesting projects nowadays. Can you tell us a little bit about this projects? And how about the Finkenbach Festival? 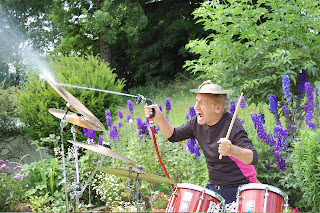 MANI - My main group is still Guru Guru. Our 31st album come out in August 2013. I just had a tour in Japan with Acidmothersguruguru, a psychedelic powertrio with Makoto Kawabata, guitar, and Atusushi Tsuyama, bass and vocals, and I drums, vocals. Very intensive, crazy and beautiful. A bit a touch of GG 1971. And I played with my Australian friends, Rory Brown, bass, + Adam Sussman, guitar, a tour in February 2013 in Australia.
Also I play with Kris Wanders, sax, in a Free Jazz quintet in Australia. And with Paul Kidney Experience in Melbourne. And, of course, my solo show, together with my wife Etsuko Watanabe s guest (vocals and percussion).
And I make together with Guru Guru and the Football Club in Finkenbach the legendary Finki-Festival, the 31st time! One of the most groovy festivals in Germany, not too big, circa 1500 people. Almost all Krautrock bands we had there and many others, like african, reggae, and other foreign groups.
Hope to play for you people in Brazil soon, 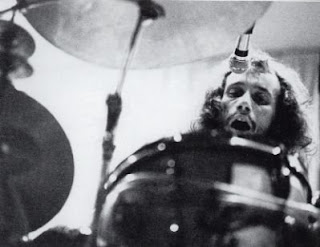