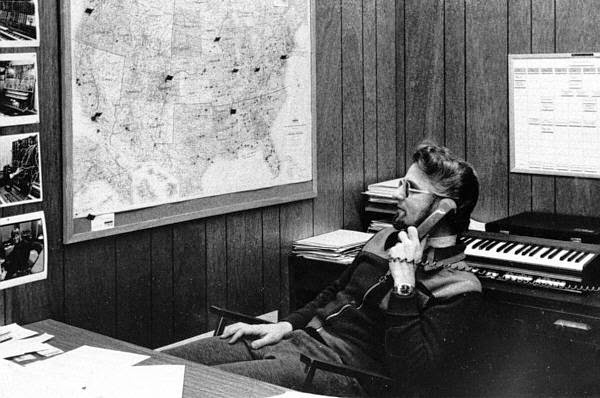 David Van Koevering was born in Grand Rapids (Michigan) on April 8th, 1940. Son of a master musician, David learnt to play a long list of instruments very soon in his life. His enthusiastic way to communicate with people and his knowledge and interest in the history of music and musical instruments led him to become a very popular music educator in the sixties. During a music educational program in New York in the late '60s, David Van Koevering had the opportunity to visit the R. A. Moog Studios in Trumansburg (NY) and soon after that he met Robert Moog, who had invented the Moog Synthesizer some years before and was in the beginning of the path to make the synthesizer that carried his last name to become the most popular electronic music instrument ever. And David was one of the persons who helped it to happen, when he decided to show the future of music to new generation, and became one of the most important Moog demonstrators and salesmen at that time. In the early seventies, David Van Koevering traveled throughout the United States, showing and selling the newly invented Mini Moog. 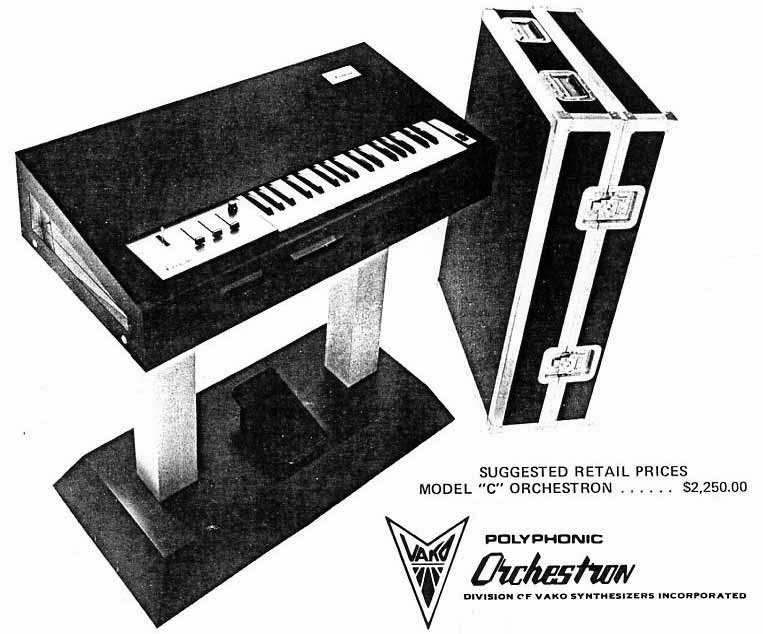 In the early seventies, R. A. Moog company was sold to Bill Waytena and had its name changed to Moog Music. David Van Koevering became the Vice President of the company. Some time later, Waytena sold Moog Music to Norlin, and David left the company. In the first half of the seventies, he formed Vako Synthesizers and, after buying the rights of the Optigan from toy manufacturer Mattel, he developed the Vako Orchestron, an instrument capable of reproducing the sounds of organs, strings, flute, choir, and other orchestra instruments. The Orchestron became very famous in the second half of the seventies by the hands of musicians like Patrick Moraz (Yes), Tony Carey (Rainbow), and the Kraftwerk members (the choirs and strings that we listen on their albums Radio-Activity and Trans-Europe Express were all played on a Vako Orchestron that the band purchased during their 1975 USA tour.) In the '90s, Van Koevering created another innovative instrument, the VanKoevering Interactive Piano, and a new association with his long time friend Bob Moog happened, as Bob being the designer of the analog parts of the VanKoevering Interactive Piano. A minister since the sixties, David Van Koevering is the President and Founder of Elsewhen Research, a non-profit corporation that provides scientific information to what the Bible claims. As a musicologist, David and his wife Becky present public performances, in which they explain the Science of Sound, the History of Music and show their collection of more than 250 rare and unusual musical instruments.

My contact with David Van Koevering was via email. I'm very grateful that he found some time to do this interview. A fact that David told me in the first contact for the interview was that he already had been in Brazil, as a missionary when he was 19, in 1960. Brasilia, the capital of Brazil, was just been built then!

Well, thank you so much for the interview, David Van Koevering!

ASTRONAUTA - David, what are your memories from your childhood and teenage days, and how music got into your life?

DAVID - As a boy of 12 I could play 27 musical instruments. My Father was a master musician and taught me at a young age. I had a natural talent, I guess I could have been called a child prodigy. At the age of 12 I was entered into competition and came in 2nd in the United States.

ASTRONAUTA - How did you meet Robert Moog for the first time?

DAVID - I was traveling and doing musical educational programs in the public schools. There is a picture of my educational presentation in Trevor Pinch's book "Analog Days". I saw an ad in the Music Educators Journal that had a photo of the R. A. Moog Studio in Trumansburg, NY which said "Come Visit Our Backroom". I was performing in the area and decided to visit. Bob Moog was in Europe so I did not meet him then. Awhile later I was performing at a school in Long Island, NY and the principal said "I want you to meet Bob Moog". He had come from Trumansburg, NY to meet me and see and hear my show. Bob and I talked about the last song on my show where I performed on a "Theremin". I had made it from and article that Bob had published in an electronics magazine. After meeting Bob that day he asked if I would like to join him and his family at Carnegie Hall in New York City. It was the first ever live performance of the "Moog Quartet" with Gershon Kingsley. During that concert something switched on in my spirit, I knew I needed to be involved! I had a huge audience and showing the future of music to the younger generation became my goal.

ASTRONAUTA - According to Robert Moog, before joining Moog Music you were already a very well known lecturer and a genius at entertaining people. And it's also known that you're one of the main responsible persons for the popularization of the Mini Moog in its early days. What are your memories about that time?

DAVID - I believe that was in reference to the fact that before I met Bob I also had been a minister and I brought that same enthusiasm into spreading the word on what I felt was the future of music. I was the first person to take the Mini Moog to the performer. I with a business partner Les Truby formed "Vako Synthesizers" (Vako formed from my last name VanKoevering). We were the first ever to order 25 Mini Moogs. As these orders were filled by R. A. Moog I took them to performing musicians and let them play them. I also opened the first night club with the Mini Moog and performed live with it on stage. We named it the "Island Of Electronicus". It was a big hit with the young generation. We had bean bag pillows on the floor and played all the hits of that time from the Beatles to Switched On Bach. The audience were also invited to play along. After making the first sales in the state of Florida I decided I needed to take the Mini Moog to the whole United States. We closed the Island Of Electronicus and I went on the road selling rock & roll music dealers all across the US. One memory I have of those early days was that one Summer while our children were out of school my wife Becky, our daughter Debbie, our son Joe and our poodle FiFi traveled the whole United States in our car setting up dealers. 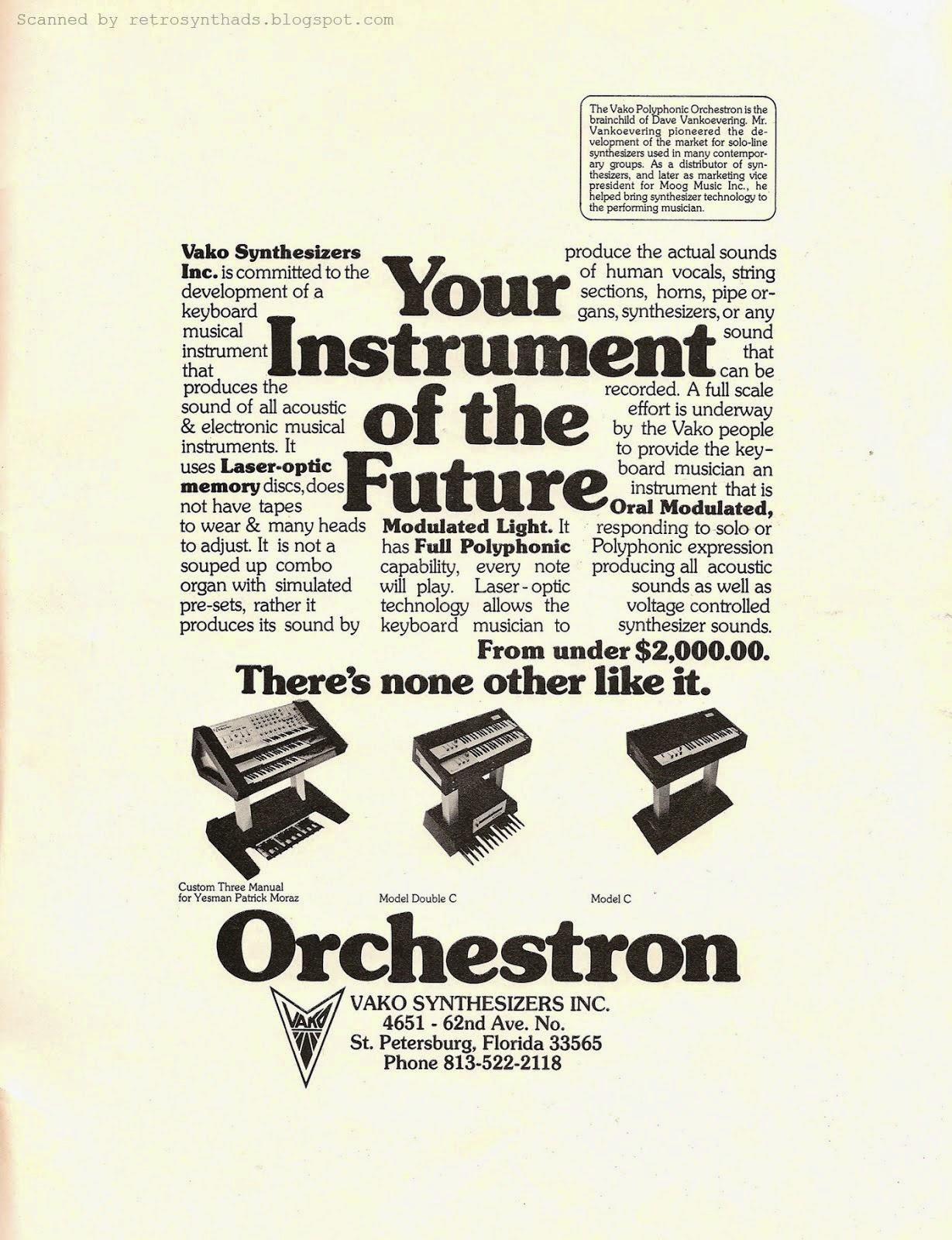 DAVID - After the R. A. Moog company was sold to Bill Waytena and became Moog Music I went on staff as Vice President and introduced the Mini Moog to 28 countries. After that Bill Waytena sold the company to Norlin and I found out the stock I had been promised in the company had been sold to Norlin. I left the Moog company and moved back to Florida. I realized there was a need for a polyphonic instrument that could play chords as well as make the sounds of a real violin, human voices, organs as well as other orchestra instruments. I contacted Mattel company who were building a toy like instrument for the home that could reproduce those sounds. I then went on to develop "Vako Orchestron" for the performing musician. The Orchestron recorded sound onto silver oxide onto a piece of negative film. Light showed thru the film into germanium arsenide thru photo cells. It became very popular and soon replaced the Mellotron which was built in Briton and was large and heavy and not very portable. The Orchestron became famous from rock groups like Kraftwerk, Patrick Moraz with Yes and Tangerine Dream as well as many others. The Orchestron was the first instrument towards the development of what we now known as the CD disc. The Orchestron is now in software form. I do still have an Orchestron.

DAVID - In the early '90s I had a vision for an instrument that could reproduce 128 sounds, could have a built in recording studio, could write the musical notes and notations as you played it then from a printer hooked up to it print it and also put it on CD. It would never be obsolete because it did not have buttons. You interacted with it thru interactive chips and touch screen that could be automatically upgraded thru software advances downloaded thru the internet. It was named the VanKoevering Interactive Piano. It had software programs that would teach you to play the piano thru interactive games and teaching lessons. It was a 5 year $ 40 million dollar project. We sold 4,700 of the beautiful piano shaped instruments to over 125 dealers thru out the US. We had 136 employees with 5 offices thru out the US. Bill Gates made the statement that the VanKoevering Interactive Piano was the best application of Windows 2000 that there was. Bob Moog became our designer of the analog side of our company. Everything stopped for us when the towers went down on 9/11. Our major investors lost millions and could no longer subsidize us thru sale of stock.

ASTRONAUTA - How do you see the differences between the musical instruments market in the sixties and seventies and nowadays? What are the main changes (for good and for bad), in your opinion?

DAVID - As a musicologist I have found that with every new technology man has found a way to incorporate that technology into a musical instrument. Steam technology brought the steam calliope, vacuum tubes brought the Hammond Organ, Bob Moog used transistors and printed circuit boards. Reading film thru light brought the Orchestron. The computer age has fostered the VanKoevering Interactive Piano along with many other instruments. Musicians down thru the centuries have found ways of making music thru technology that was available to them.

ASTRONAUTA - What are your most recent projects? And plans for the future?

DAVID - My most recent projects are to do with healing of the body with sound, light and frequencies. Royal Rife in the '30s & '40s developed a beam ray machine of radio frequencies that when connected to his electron microscope produced a radio frequency into the body and demonstrated over 1000 cancer tumors cured that have been verified with doctors affidavits and patient testimonies. My VanKoeverin Interactive Piano that can play back the frequencies of a Steinway piano and 127 other instrument frequencies can certainly play back the Rife frequencies that turned cancer off is a greater potential and application of technology than building the world's most sofisticated digital musical instrument. My work with lasers and plasmas will connect healing frequencies for all major diseases. Just wait and see what will happen in the near future 12-18 months from now with cell phones and iPads.
This have been a very exciting trip. A look into the past as well as seeing the future. Wish you could have been there. Some of your readers have. 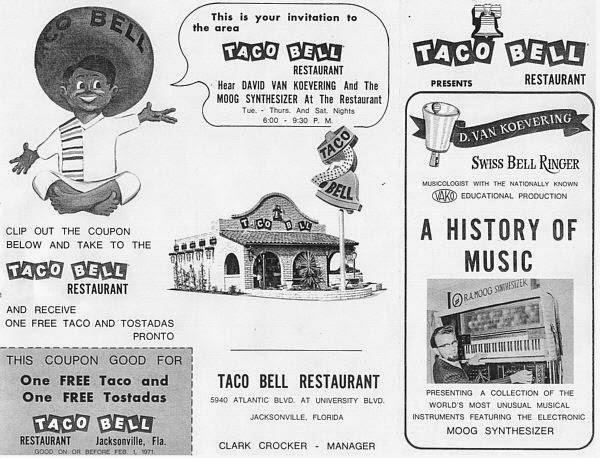 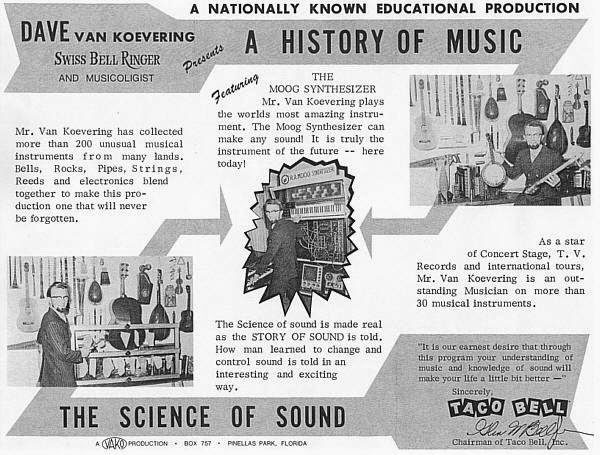 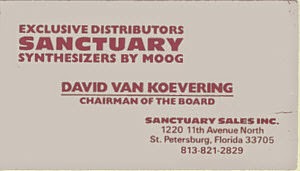