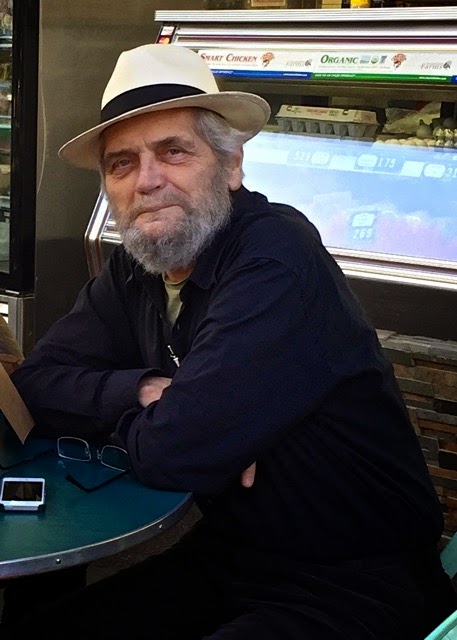 Charles Shere was born on August 20, 1935, in Berkeley, California, USA. In his childhood he took piano and violin lessons and, a little later on, he also studied woodwind instruments. He studied music and English literature at Chapman College, Santa Rosa Junior College, San Francisco State University, and the University of California at Berkeley, where he graduated com laude in 1960. 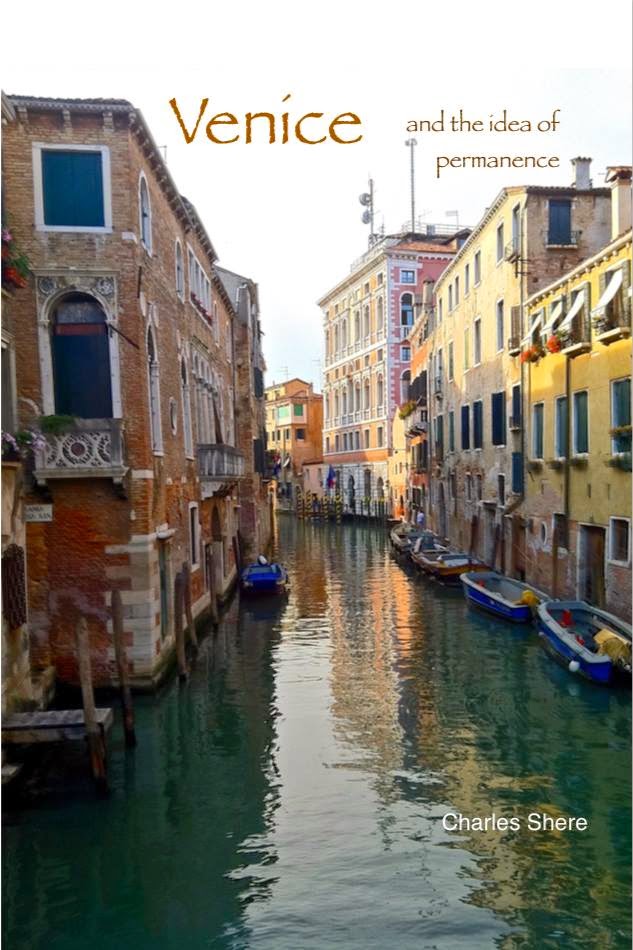 In the early '60s, Mr. Shere studied composition with Robert Erickson privately and at the San Francisco Conservatory, and with Luciano Berio at the Mills College. In the mid-sixties, he was the Musical Director of KPFA, in Berkeley, one of the main Radio Stations in broadcasting avant garde music. His works as a composer includes pieces for piano, violin, orchestra (Nightmusic, 1967; Symphony in Three Movements, 1989; concertos for piano, 1964; for violin, 1989), poet speaking in tongues and chamber orchestra (Tongues), soprano and violin (Certain Phenomena of Sound, 1983,) and, among many other pieces, an opera called 'The Bride Stripped Bare by Her Bachelors, Even' (1986,) based on a painting by French-American artist Marcel Duchamp. His books include 'Thinking sound music: the life and work of Robert Erickson', a biography on American composer Robert Erickson; 'Getting There', a memoir covering the period in which we focused to realize this interview; and the newly published 'Venice and the Idea of Permanence', with essays on art, cuisine, music, and other subjects. He also has a restaurant called Chez Panisse with his wife Lindsey Remolif Shere and other partners, and he runs an interesting blog, that you can visit here: http://cshere.blogspot.com.br/

My first contact with Charles Shere to make this interview possible was via Facebook, and then via email. I'd like to thank him so much, for giving us some time to answer to my questions. Thank you so much, Mr. Shere! And now, here's the interview: 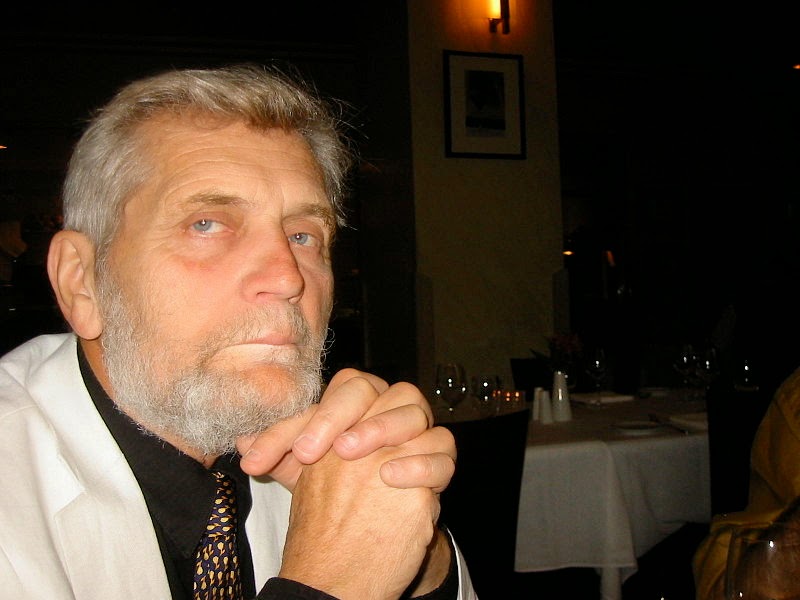 ASTRONAUTA - Mr. Shere, what are your memories from your first contact with music and arts? And which instrument was your first choice?

CHARLES SHERE - My earliest memory is of my playing violin in a children's orchestra at the San Francisco World's Fair on Treasure Island, which closed, I believe, in 1940 or 1941 (I turned six years old in August 1941). We played a piece called the Kitty-Cat Waltz, which involved glissandi on the E string, and the little girl sitting next to me wet herself during the concert, out of nerves. That's all I recall of that.

At that age I took violin and piano lessons, but from 1942 until 1949 I took no further lessons and had no instrument at hand.

When I started high school, fall 1949, I signed up for instrumental music. My chief instrument was the bassoon, but I also learned the other woodwind except flute, the French horn, and the tuba. There were no stringed instruments at my school.

When I went away to college I played a little bit of French horn, as I never owned a bassoon of my own. I joined the college orchestra, and was asked to play the bassoon parts on the horn, as no bassoon was available. When our concert was finally played, though, a bassoonist was hired, so I was made to play triangle in "Caucasian Sketches," but second horn in a Haydn symphony.

ASTRONAUTA - And how about your first contact with the avant garde music and arts? And which composers most influenced your own compositions?

CHARLES SHERE - First contact: a concert of chamber music by Anton Webern at UC Berkeley, about 1958; a noon concert of music by LaMonte Young and Terry Riley (who were then students at UC Berkeley) at about the same time; a concert of music by John Cage with Cage and Tudor in San Francisco, 1960. It took a few years for me to come to terms with this music, but I immediately found it fascinating. In those years the radio station KPFA broadcast a series called "Contemporary Music in Evoution," curated and produced by Gunther Schuller, and broadcasts from Donaueschingen and other festivals.

ASTRONAUTA - In the early sixties you've studied with Robert Erickson and, later on, you also wrote a book on him, "Thinking Sound Music: The Life and Work of Robert Erickson." How are your memories about the first time you've met Mr. Erickson, and also about your last contact with him? (If your don't mind to remember and tell us about that.) 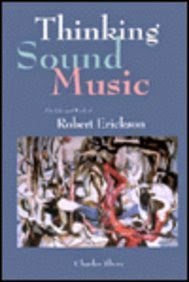 CHARLES SHERE - I think I was introduced to Erickson by Gernhard Samuel, who was conducting the Oakland Symphony, and from whom I took a few conducting lessons. I recall few specific things about Erickson's teaching, which seemed very indulgent, supportive, gentle. He taught us - I studied in a class at the San Francisco Conservatory, as well as privately - he taugh us to use a circular slide rule to "modulate" among tempi, by changing the beat from e.g. a quarter note to a quarter tied to a triplet eighth, then use that as the new tempo for a quarter, and so on. He also introduced us to the lettering angle and the Rapidograph to allow us to drawn our own staves, which I now recognize liberated us from conventions, an important aspect of his teaching.

After he moved to San Diego, to help set up the music department at UC San Diego, I saw very little of him; but when I began the biography I tried to get down to see him every year or so. He was quite ill his last few years. Shortly before he died he asked when my book was appearing. Not until I finish it, I said. Well, finish it, he said. He never mentioned that another book was also in the works, by another writer.

ASTRONAUTA - And how about Luciano Berio, another of your composition teachers?

CHARLES SHERE - Two anecdotes: I sat down early in his classroom; he was at the blackboard, finishing writing out a gorgeous melody that I took to be J. S. Bach. When I said how beautiful it was, he grinned and said he'd just thought it up. On another occasion he was rehearsing an ensemble in his "Circles," and the harpist complained that his writing was too percussive for the instrument. You don't understand the harp, the player said, the harp is a complex instrument, half female, half male. Well, Berio said contemptuously, looking down at his trousers, I'm all male.

Of Berio's teaching I chiefly remember exercises involving magic squares of numbers, that sort of thing. Not much looking at one's ongoing work and encouraging changes and developments, which Erickson did very well.

ASTRONAUTA - In the mid-sixties you were the Musican Director of KPFA, one of the most important vehicles on promoting the avant garde arts in its time. It was also at that time that the psychedelic rock scene began to call attention to California, mainly to the San Francisco Bay Area. How do you see and describe the importance of KPFA, and how do you relate the radio station to other radio stations of that period of time?

CHARLES SHERE - Briefly put, the importance of KPFA, through the 1960s - I resigned as Music Director in 1967, and left the station completely by 1970 - its importance was in making accessible new and unusual music from other parts of the world. There were few commercial recordings of such music in those days, and of course no Internet. There were also discussions, reviews, and interviews - I interviewed Boulez, for example, and Feldman, and Cage, and Stockhausen, always using such opportunities to dig into their thinking and work to try to comprehend it, and often quite deliberately copying, to get into their hands. (I had been taught to do that in my very conservative theory classes at Chapman College, Los Angeles, in 1953; and besides, in those days before copy machines, since I couldn't afford scores by Webern, for example, I copied them at the library.)

I myself was never attracted to rock, but many of the emerging rock musicians had themselves been exposed to new things by KPFA. I commuted to Mills College for my lessons with Berio, for example, with Phil Lesh and Tom Constanten, before Phil helped form The Grateful Dead - he'd played trumpet in music I wrote for a UC Berkeley production of a Tennessee Williams play (Camino Real) about 1960.

KPFA had a sister station at that time in New York (WBAI) and Los Angeles (KPFK), but it's my impression that the San Francisco Bay Area was more innovative than either New York or Los Angeles, probably because it had been more isolated.

The advent of sharing technologies like cassette tape helped to move radio away from its very significant position as facilitator of the experimental. It was perhaps no longer so important. And of course the avant garde quickly developed very successful new followings, always a little suspiciously commercial to my mind, but very significant socially. I was lucky to be in the Bay Area, and at KPFA, at an inspiring and inspired transitional moment.

ASTRONAUTA - How do you see the present, and foresee the future of the avant garde music and arts?

CHARLES SHERE - I see I've begun to approach that question already. Fifty years ago many thought that after John Cage, after Marcel Duchamp, there was little left to discover. Ezra Pound's admonishment to "Make It New!" seemed impossible to obey; it was time to return to already discovered continents and investigate in greater detail great expanses the pioneers had leapfrogged in their rush to discovery. Of course it was said Joyce had finished the novel, but seventy-five years of publishing has followed the appearance of Finnegans Wake.

One replacement for the musical avant garde of the 1960s has been World Music, which the new technologies and the new global economy have facilitated - it began to affect the more traditionally rooted avant garde by 1970, when Steve Reich and Phil Glass brought African ideas to "minimalism," and it is now crossing into a commercialized entertainment wing of serious music through such performers as the Kronos Quartet and Yo Yo Ma's Silk Road Project.

But as to foreseeing the future, as some great thinker once pointed out, if one could do that, it wouldn't be the future, would it?

ASTRONAUTA - And, one last question, how do you relate your other interests to music and writing? 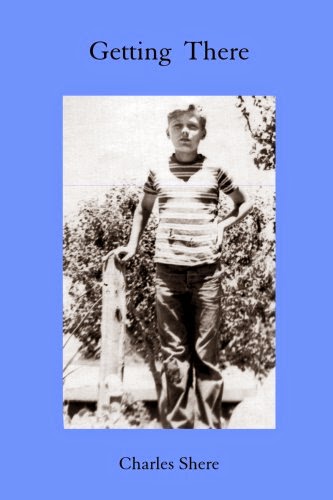 CHARLES SHERE - I think the greatest gift to humanity was the creative intellectual curiosity. As Lou Harrison liked to say: I like a lot of toys, and a big playpen. Music; literature; visual art; theater; travel; nature - the more one embraces, and the more closely one examines it, the richer one's life is, and the more frequent and memorable its pleasures.

So I spend my time reading and writing, traveling and contemplating, conversing and listening, much as I have done this last hour writing out these answers. I will be eighty years old this summer, and I enjoy my age. I am finally comfortable with the idea that I have begun to understand some things, or at least to comprehend them. Most of it can't be put into words, of course, but one continues to try.