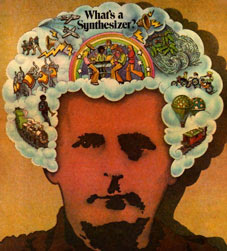 In the second half of the '70s, Moog Music - the company founded by Robert Moog in 1953 in NY City, that in 1975 became a division of Norlin Music, Inc. - was at the height of its existence. It was almost 10 years after the initial impact caused by the invention of the synthesizer and the fear that the machine could replace the musician was already dead and buried: bands and artists from almost all kinds of music used synthesizers in their performances and recordings. Some musical styles were born totally based on the use of synthesizers, as the new style that emerged in England - based on the German bands like Kraftwerk - and would direct nearly all the musical production of the next decade: the Synthpop. 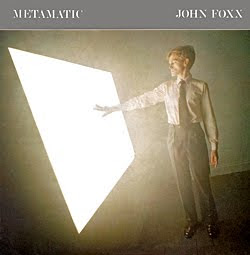 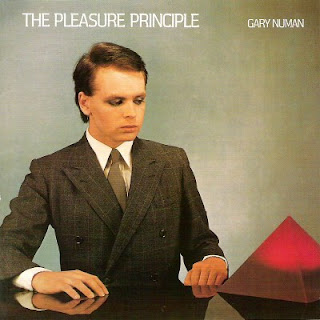 Coincidentally or not, in the same period that Synthpop was born, musical instrument companies started to invest in making more accessible synthesizers (both in price and ease to operate) and Moog wasn't out of this trend. The Minimoog was still a relatively expensive and the modular models were very complicated to be used by beginners (and obviously extremely expensive) the solution was to adapt and simplify on new models. In 1978 comes the Multimoog (the bigger brother of the Micromoog, that appeared in 1974) and in the following year appeared the models Liberation, Opus 3, Rogue and - probably the best known of them - the Moog Prodigy. 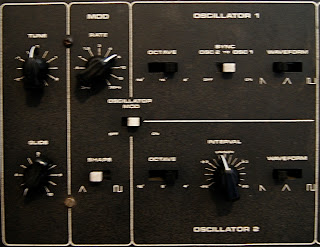 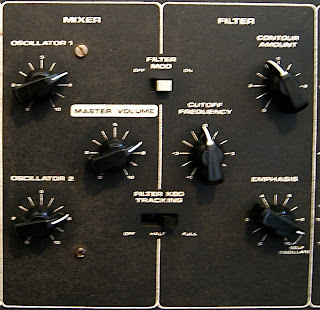 What made the Moog Prodigy so popular (around 11,000 units were sold) was its simplicity, especially if compared to the Minimoog: only two voltage controlled oscillators (VCO) - oscillator 2 can be sync'ed to oscillator 1 - generate three waveforms that can be selected on three different octaves (oscillator 1 between 32 ', 16' and 8 'and the oscillator between 16', 8 'and 4'). The signal passes through the VCF - the classic 24dB per octave Moog Filter (with controls for attack, decay and sustain) and the signal is sent to the VCA (voltage-controlled amplifier), also with controls for attack, decay and sustain individual. A single on/off switch controls the release on the VCF and the VCA (like on the Minimoog). 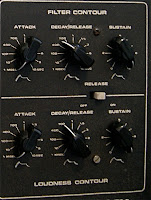 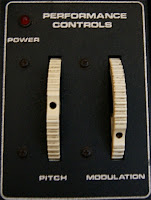 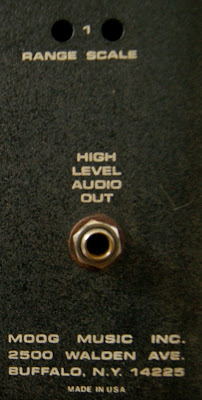 The rear of the first Moog Prodigy models (those manufactured between 1979 and 1981) has only one audio output and internal adjustment keys for instrument calibration. Models made ​​from 1981 on (starting on the serial number 4160) included jacks for external controls (an S-trigger, an input/output for an external keyboard and inputs to control the VCO, VCF and the sync). As mine was manufactured before 1981, it doesn't have these extra controls. 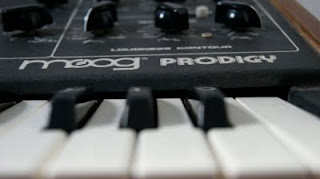 Among all the artists that used a Moog Prodigy in their records, impossible not to mention first The Prodigy (the electronic music band led by Liam Howlett, who decided to name the band with the name of his first analogue synthesizer). Another big name in electronic music produced recently that used a Moog Prodigy is Fatboy Slim (the synthesizer appears - among other nice equipments and thousands of LP's - in the inner sleeve of his best known album, "You've come a long way, baby", from 1998). The band Depeche Mode (Andrew Fletcher appears using a Moog Prodigy in two different performances at the UK tv show "Top of the Pops" in 1981, playing the songs "New Life" and "I just can not get enough"), Blur, Massive Attack, The Album Leaf, Nine Inch Nails, Moloko, 808 State, Christian Lorenz (from the German band Rammstein), EMF and the composer/musician Howard Jones are also great names that played with a Moog Prodigy. 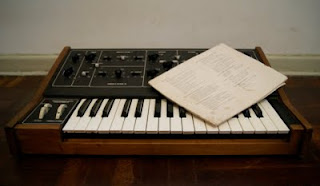 My Moog Prodigy - serial number 3766 - was the first Moog synthesizer I ever bought (I had a Korg 700s, an ARP Omni 2 and a Roland JX3P at the time) and it also was the first Moog I played in my life! I bought it in late 1997 and I remember going to Porto Alegre, south of Brazil, with Emilio (a friend of mine who was present some other times when I bought vintage instruments somewhere. He also helps me to remember some facts). Actually I have not bought the Moog synthesizer but a number of drum softcases and used it as "money" to pay the previous owner - I think his name was Daniel, I do not remember, but obviously he was a drummer. A curious fact is that the contact for purchasing the Moog Prodigy was done through the internet, via email or something, and that wasn't so common at that time (at least for me). Well, I got home, happy with my new instrument but it wasn't functioning - probably because it wasn't being played for a long time - so I took it to Paulinho, the technician who repaired my instruments when I was living in Rio Grande do Sul (Brazil), he opened the synth, cleaned it and ok: here it is the Moog Prodigy working perfectly until today! This instrument has traveled with me all around this country, from Bage - in the extreme south of Brazil - to Rio Branco, Acre - extreme north of Brazil! 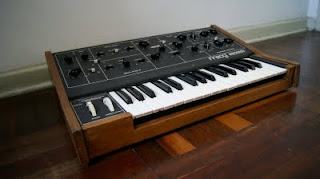 And here's a video of me playing a prototype of my song "Wir sind nicht allein" (called "Blitzkrieg" at that time) on my Moog Prodigy, with Felipe Messa on bass guitar and Cristiano Nanão on the drums. It was recorded on July 25th, 2010 in Porto Alegre, RS, Brazil:

I found these ads on the internet: 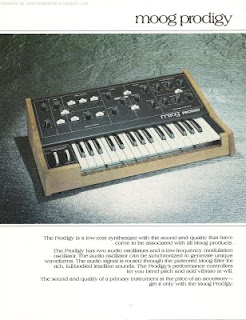 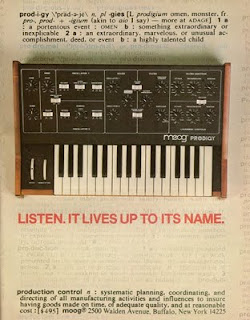 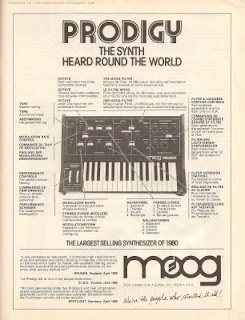