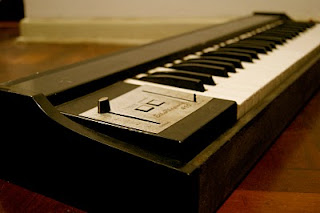 Elka was an Italian company that existed in the '70s and had Piero Crucianelli (brother of Mario Crucianelli, founder of Crumar, another famous brand of analog synthesizers and keyboards) as the company's president. Perhaps his most famous instrument - and nowadays most valued - has been the Synthex (designed by Mario Maggi, Italian electrical engineer and one of the technicians responsible for the album "Automat" in 1977), but without a doubt the keyboard that was their "best-seller" and one of the main reasons for Elka becoming a world renowned company were the "string machines" Rhapsody 490 and Rhapsody 610. The main differences between the 490 and 610 is that the latter has sounds of piano and clavinet besides the violoncello and strings that could be found on the 490 model. The number present in each name indicates the length of the keyboard - the 490 has 49 keys (4 octaves) and the 610 has 61 keys (5 octaves).

The Elka Rhapsody 490 began to be manufactured around 1974, exactly on the market boom of keyboards that emulated strings instruments sounds. But, of course, its sound doesn't sound exactly like a violoncello or a strings ensemble and not even sounds as a mellotron. The 490/610 sound is very very unique. Its manufacturing lasted until about the year 1980. 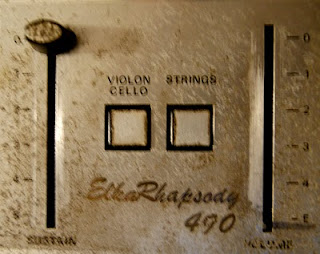 With a rugged and very strange chassis - which does not diminish in any way the sound of the instrument - and a simple electronics, the Rhapsody 490 has only two different timbres (violoncello and strings), which can be added to each other resulting in a third - and more interesting - sound tone. Sliders for volume and sustain complete its few possibilities. The keyboard has 4 octaves (C to C) - as already discussed above - and total polyphony. On the back there's only one instrument audio output and a 3-pin socket for the sustain pedal.

Among the artists and bands that have used such a model I can quote the krautrock band Tangerine Dream and musicians and composers Jean-Michael Jarre and Vangelis Papathanassiou. Tony Banks, the Genesis keyboard player, used an Elka on the intro for the song "Here comes the supernatural Anaesthesist" from the magnificent album "The lamb lies down on Broadway" (1975), adding the Elka Rhapsody sound to the mellotron. Already Steve Hackett (Genesis guitarist) also used - probably the same instrument - on his "Voyage to Acolyte", in the same year. The Italian band Locanda Delle Fate used one on their album "Forse le più amino luciolle non si" (in 1977) and Claudio Simonetti from the also Italian band Goblin - known for the soundtracks to the films of Dario Argento and George Romero - also used a Rhapsody 490 in several songs (some videos can be found on youtube, from Italian TV shows in the 70s!) 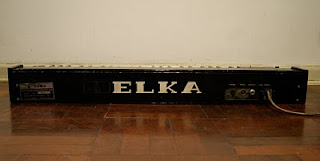 The curious thing is that the StringVox, a keyboard manufactured by the German company Hohner, and the Elka Rhapsody 490 are exactly the same instrument! The only differences between the two is that Elka's instrument came in a black chassis while Hohner's instrument came in a beige chassis and had the on/off switcher's inscriptions in German - "aus" and "ein". 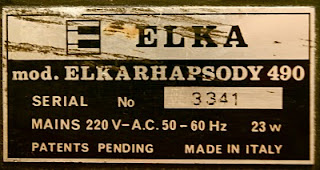 I have my Elka Rhapsody 490 for about fifteen years (maybe more, I have no way of knowing for sure). I remember going with my father's car in the town of Portão (Rio Grande do Sul, Brazil) to pick it. At the time I bought a Fender Rhodes Mark I 88 from a nice guy called Jones and the Rhapsody 490 came too, as a gift. I ended up selling the Fender Rhodes (only by sheer stupidity) but I kept the 490 for all these years. It is a very cool instrument and I use it in some shows and recordings, mainly when I need a nice string sound. Indeed, it was one of those shows that I lost the original volume slider. Its serial number is 3341 and my Elka still has a "Casas Manon" sticker pasted on it - "Casas Manon" was an old musical instrument store in São Paulo and probably it was the first place where it was purchased, still in the 70s. The keyboard is working well, though needing an internal cleansing on the electronics.