Located in Lexington (Massachusetts USA), the ARP Instruments, Inc. - named with the initials of the name of its founder, the electronic engineer Allan Robert Pearlman, in 1969 - entered the '70s as a very famous company in the synthesizers market. Several artists used to use their equipment and a large number of musicians and studios owned their instruments, mainly for reasons of cost/benefit (although still very expensive, the ARP instruments were considerably cheaper than the equipment manufactured by Moog, for instance). The company also endorsed several artists very well known by the general public, as Pete Townshend and Stevie Wonder (among many others), as a way to promote the company's name. This strategy made the company's name to become very famous, mainly for their instruments appearing in the credits of several hit albums at the time.

In 1974, ARP brought to market their most popular equipment: ARP String Ensemble or ARP Solina, as it is also known. I say that this device may have been their most popular because almost any dance band owned a keyboard of this model to emulate the sounds of a strings orchestra. After that, the company was always increasing the ARP String Ensemble and creating new versions and new models (ARP only stopped manufacturing it in 1981). Some of these new models - that used basically the same principles of the string ensemble with some additions - were the ARP Omni, ARP Omni 2 and ARP Quadra, all with polyphonic and bass synthesizers added to systems.

The ARP Omni 2 (the model I own) has a 49-note keyboard - 4 octaves, from C to C - with full polyphony and is divided in three sessions: a string ensemble with 4 preset sounds ("bass", "cello" "viola" and "violin", with sliders to control ATTACK and RELEASE and a slider to control the LFO rate), a polyphonic synthesizer (range of octaves between 8 'and 4') and a "bass synthesizer" (with variation between 16 'and 8' and a selector for "staccato"). Both the polyphonic synthesizer and the bass synthesizer have sliders to control ATTACK, DECAY, SUSTAIN and RELEASE and a 24 dB/octave Low Pass Filter (with controls of FREQUENCY, RESONANCE and LFO). A switch to turn on and off the Chorus/Phaser, another switch to select the waveform generated (between a square wave and a sawtooth wave), another switch to choose between single mode and multi trigger for envelope, and sliders for general volume, a mixer between the string ensemble and polyphonic synthesizer and a independent volume slider to control the bass synthesizer completes the front panel of the ARP Omni 2.

In the rear of the ARP Omni 2 there are separate outputs for each of the sessions (strings, synth and bass), a footswitch jack to control sustain, jacks for pedals control volume and filter, an P-10 output jack and another XLR output jack (with level control between high and low) and a synthesizer's interface, with gate, trigger and CV jacks. 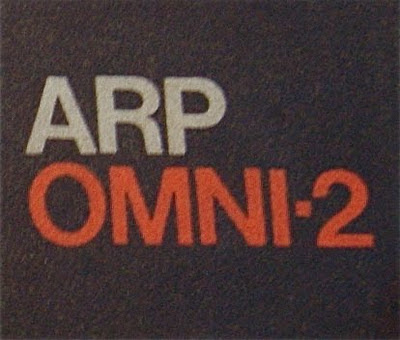 There are few differences between the internal structure of ARP Omni and ARP Omni 2: only small changes in the Chorus/Phaser circuit, a separate output to the bass synthesizer (on Omni 2, the first model only had individual outputs for strings and synthesizer ) and a selectror switch between "single" and "multi"-trigger to control the envelope polyphonic synthesizer. On the other hand, the external structure of the two models are very different, mainly because the ARP Omni 2 started to adopt a chassis made ​​entirely of steel (with leather sides, a characteristic of various ARP synthesizers) and the orange, black and white control switches and logos - one of ARP's most recognizable trademarks). 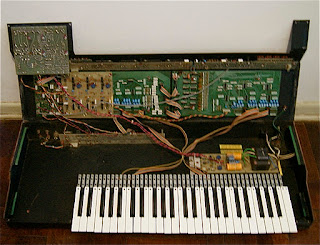 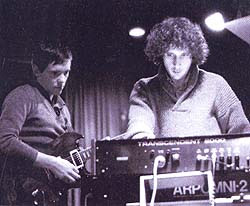 Some of the artists who played on an ARP Omni and/or an ARP Omni 2 recordings were: Joy Division (several of the songs on the album "Closer" has the characteristic sound of the strings of an ARP Omni 2. In "Love Will Tear Us Apart" - perhaps Joy Division's most famous song - guitarist Bernard Sumner appears in the official video clip using one ARP Pmni 2. On the picture on the right Bernand Sumner appears alongside Martin Hannett, the producer of the band's albums), New Order (on the first album, probably the same instrument, used by Joy Division, since New Order was born from the ashes of Joy Division), Gary Numan (on youtube you can find a christmas special edition of "Top of the pops" in 1979, which an ARP Omni 2 and a Polymoog are being played, in the songs "Are Friends Electric?" and "Cars"), Tangerine Dream, The Cars (on "Let The Good Times Roll"), Kraftwerk, Supertramp (keyboardist and vocalist Rick Davies used to travel with two instruments of this model), Modern Inglês (on the track "I Melt With You", 1982), John Foxx (his latest band, John Foxx and the Maths, is traveling with an ARP Omni), Steve Hillage (on the album "Rainbow Dome Musick", 1979), american jazz musician Roy Ayres, the bands Boston and Kansas (in "Dust In The Wind"), The Commodores, Al Kooper, keyboardist Allan Zavod (from Jean-Luc Ponty's band), Cat Stevens, Dave Greenslade, Electric Light Orchestra, and many others, including the already mentioned at the beginning of the text as "endorsers" of the ARP instruments, Stevie Wonder and Pete Townshend. 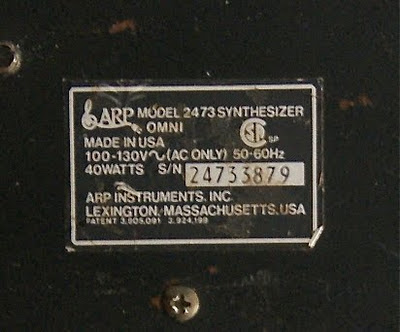 My ARP Omni 2 (serial number 2473- 3879. The first four numbers indicate the model) was one of the first instruments I bought in my life. Before him, I think I only had the Korg 700S, maybe some other one, I don't not remember so well. But it was certainly among the first instruments I ever bought. At 18 years old - in 1994 - I worked in a music store in New Harburgo - Rio Grande do Sul - and this keyboard had been put up for sale by a guy named Ivo, the keyboardist and owner of a popular dance band in Rio Grande do Sul. As I worked there in that store, I bought it straight from him. I remember I paid R$ 200,00 (U$ 100) or something like that, but this was more or less what I gained in a whole month of work, so it wasn't so cheap like it seems. Anyway, I bought that already knowing that I would have to fix some things and during these almost 18 years that this instrument is with me, it worked and stopped working several times. The last time I fixed it and put it to work was to record the song "Harajuku Girl" to my latest album, "Zeitgeist/Propaganda". As the Omni 2 did get back to work fone and it was standing in my parents' house for a long time, I decided to use it in a some shows I did in North American Cultural Center in Porto Alegre, in 2009 (there are some videos on youtube of these shows). After that, I took it for a mini-tour that I played with a brazilian comic/parody singer Jupiter Maçã, in Rio Grande do Sul and Paraná. Unfortunately - and given the brutality with which the baggage handlers in the brazilian airports use to deal with the belongings of their passengers - the keyboard came back from this series of concerts with two broken keys and it also showed some components malfunction. In November 2011, I stayed some days in my parents' house in São Leopoldo (RS), I decided to open and start a reform in my ARP Omni 2, including fix the two broken keys (and cleanup of other keys), glue the sides of leather and paint the chassis, which was rusty since I bought it. Unfortunately my limited knowledge of electronics (for now) made me stop, so I had to fix the components that are not working. But I am already scheduling to visit my friend and genial electronics technician Cardoso and soon we can resolve and make to come back to work this great piece in my collection of analog instruments!

I found some ads from the time of release of the ARP Omni: 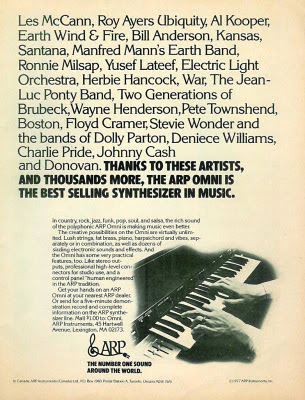 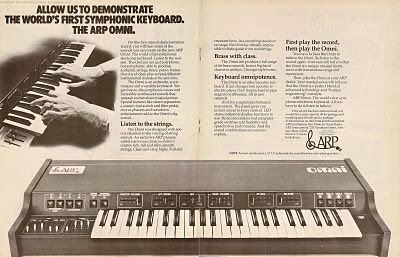 At the time (obviously), the ARP sent a ARP Omni demo disc by mail, to the people who was interested enough to contact the company. Here is the announcement: 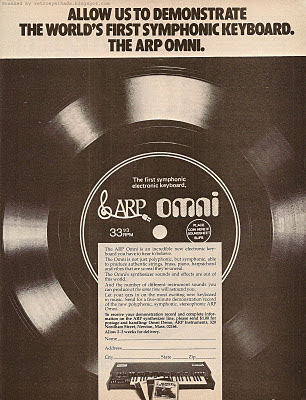 And here are some ads from the days when the ARP Omni 2 replaced the first model: 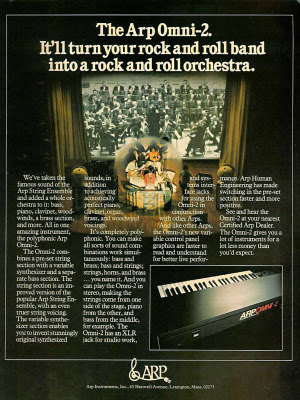 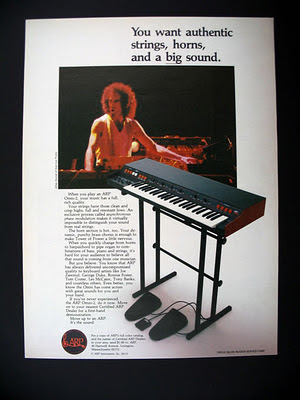 As my ARP Omni 2 is momentarily in the reform process and still not working perfectly, not recorded my video demonstrating it. Put here a video I found on youtube, recorded by American musician Mike Thompson:

The song "Harajuku Girl" (from third solo album, "Zeitgeist/Propaganda"), can be heard and downloaded here in two versions: