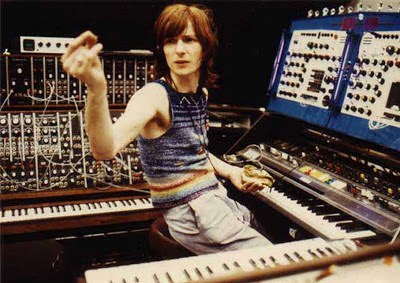 Timothy Blake was born in Shepherd's Bush, west London, on February 6th 1952. He was a recording engineer in his teenage days when he met Daevid Allen and was invited to join Gong, a jazz-space-rock band that became very famous, partly because of Tim's synthesizers, electronic effects and his compositions, recorded mainly in the "Radio Gnome Invisible" trilogy. Tim was part of Gong "family" from 1971 to 1975. 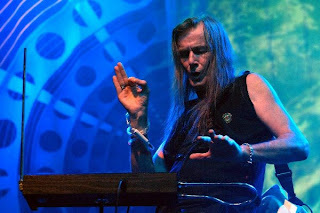 When Tim left the band he was already working with French Light Artist Patrice Werrener since 1971, under the name Crystal Machine. The format of concert that Tim and Patrice took to stages was very innovative and together they became one of the first acts in the whole world to work exclusively with analog synthesizers and lighting on their concerts (introducing the Laser to the entertainment world for the first time in 1975). Crystal machine recorded two amazing albums ("Crystal Machine", 1977, and "Blake's New Jerusalem", 1978, with Jean-Philippe Rykiel on the Minimoog) before Tim joined another great "Space Rock" band - Hawkwind - for a brief period of time, between 1979 and 1980. After playing on several occasions during the years Tim Blake is back to the band since 2007, playing Theremin and "Virtual Lead Guitar".

Tim Blake's discography contain more that 25 albums, including 6 records as Tim Blake/Crystal Machine. They are available to download on Tim's website ("Crystal Machine", 1977, and "Magick", 1992, are also available on CD). Gong and Hawkwind albums that have Tim on the line up are commented by himself on the website too!

I contacted Tim Blake for the first time via Facebook and I asked him if we could do this interview via email. He was very gentle and found some time in his busy life to send me back the interview and here it is! Ladies and gentlemen, Mr. Tim Blake, the man who put some "space" into "rock"!


ASTRONAUTA - How did you become a musician, what were your first steps on (electronic) music and what was your first synthesizer (or keyboard)? Do you still have the instruments you played on the seventies?

TIM - I left school quite early, at 16 - and Yes - it was 1968! I was immediately projected into a world where the 'Summer of Love' contrasted with the repression of Freedom in Tchequeslovakia.
I had pretty deep musical interests all through my life with a liking for all from very choral music, through the Baroque to the blues and burgeoning rock of the '60s to even some stranger electronic stuff... Berio - Pierre Henri (who try twice to mix his music concrete to a rock element). I was a fairly competent Trumpet player when I left school, but also enjoyed Blues harp and guitar playing...

I did a year (68-69) at a Performing Art School in London, too. In parallel, I became an apprentice sound engineer, and spent more and more of my time hanging out with musicians (notably the late Paul Kossof). One day, a fellow student, Celia Humphris, told me that she had landed a job singing in an upcoming folk-rock band, Trees (with whom she sang the haunting 'Garden of Jane Delawney').
Thanks to Celia, I was now in the middle of a very creative Hub of people, groups, managers, artist of all sort... It ended up with me doing sound for Clearwater's once a week gigs at All Saints Hall, and on the road with High Tide.
One evening, in the end of august 1969, when setting up my sound for a High Tide gig, some guys approached me as asked me if they could play support, and that's how Hawkwind was born.

Electronics in music at this time was all sort of tape looping and collage (the second phase of music concrete, I suppose) and fun with oscillators and echo units...

Of course by then, we'd all heard "Switched-on Bach" - and then EMS - a UK company started making synths, and we were all on the case, Floyd, Hawkwind, and myself!

There were some great music festivals in those days, too, and I suppose I had met and worked with all my heroes by the time I was 18!

By 1971, I had a good reputation with handling sound, and was introduced to Daevid Allen, and left for France with him, just before Easter.

TIM - I find very little similarity between the two groups at all, really. Hawkwind's music has always been highly influenced by Dave Brock's love of simple Folksy Ballads (he was a fantastic street musician at the beginnings) and basic Blues Rock, 4/4 rhythm. If you look through the amazing repertoire of the past 43 years, you see these two elements coming up time and time again, especially in all the "hits"!

Gong, on the other hand, was something quite new to me. Daevid had made his way into the music world being surrounded by very Jazz-influenced musicians... Soft Machine in particular. His first explorations into what was to become Gong was with very 'avant-garde' jazzers - of whom we must point out the amazing wind player, Didier Malherbe. The making of the Gong Band in the early '70s, with Christian Tritsch, gave us the bass of rhythm gliss, a very important part of Gong music.

The common line has, of course, been the opening to "Spaciness", and that is where, both as an engineer and later, a musician, I was able to find my place in both  bands.

The most Hateful things? Well, "Doggy" business dealings for one - in both bands - but surely not for the same reason!
With Hawkwind it's been mostly unsafe, greedy management, whilst, with Gong, the honesty of Daevid Allen has really to be put into question!
Art and business have always, in my life, been highly difficult to combine.

The Grateful things? - Well in Gong's case, Daevid 'copping' out of the Band, at the Flying Teapot recordings, allowed me and Didier to reform the group into a highly harmonious unit with Steve Hillage and Pierre Moerlen, and later to absord Mike Howlett.
This was the format that gave me the real opportunity to expand my own musical ideas with them, and of course that's when 90% of Angels Egg and You were written. Malherbe, Hillage and Moerlen are some on the most amazing musicians I have lived, played and written with in my live.

Hawkwind have always been able to tune in to me when I was putting everything I had doing into question, and offering me a chance to go different ways - Dave and I both think 'Onwards' - You cannot do the same thing for 40 years - one must develop.
I imagine that it is because so little of the "Classic" Gong music was actually written when Daevid was around, that he has persistently toured for so many years playing the same music... Daevid just changes the names and the authors in order to dispose of the financial gain in the way that suits him best! I suppose this is essentially because he is ashamed not to have been at the source of so much of the music that he enjoys performing so much. It must be so very sad for him, deep inside!
It was very glad to see Steve Hillage back in the band for the 2009/10 tours, and hear some real new music written!

But does not seem such creativity has continued since he slipped out again!

Of course - the great thing about playing with Hawkwind in the years 2010s is that I have completely changed my music making techniques, playing virtual synths, controlled by Theremin and my AX - Onwards - there is No Turning Back!!! 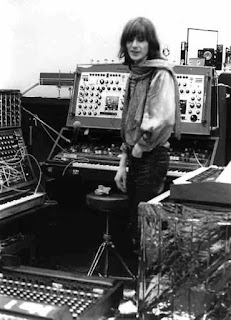 ASTRONAUTA - How was the recording process of the albums "Crystal Machine" (1977), "New Jerusalem" (1978) and "Waterfalls in space" (1979)? What was the synthesizers you used to record this albums? Do you still have some of those synths?

TIM - Ah. Analogue days! Well, my double EMC outfit, a Modular Synth, either Roland or Moog, and my trusty Mini Moog, with a variety of the first polyphonic stuff!

Of course - from Jerusalem onwards - the greatest input into Crystal machine music was finding someone I really enjoyed playing with, Jean- Philippe Rykiel.
Apart from being a great mini-moogist from a very early age, Jean-Phi is also a pioneer of polyphonic synthesis.
He has become a great record producer too, these days, specializing in African Music...

Waterfalls in Space was recorded by Jean-Phi while we were rehearsing.

Most of my Analogue gear is in the hands of a specialized collector in England. He is a very competent eletronician and restorer, and they all look a play beautifully again!
My Roland modular system is in the hands of Romain Turzi, one of the Today's French electronic rock musicians.

ASTRONAUTA - You are always mentioned when the subject in a conversation is the EMS synths! What was your relation with this equipment and with the EMS synth inventors (Peter Zinovieff, David Cockerell and Tristan Cary), did you meet them personally in the '70s?

TIM - My EMS relations were mostly with Robin Woob (now the owner) and the technical people, Graham Wood, Graham Hinton, with whom most of the unique modifications to my set-up were designed.
I've met Zinovieff, of course, but not Cockerell or Cary. Peter seemed to look down on those who played the EMS synths, regarding them as toys he sold to finance his huge computer music studio. I have never heard a note of his music!!
I believe I once impressed Peter at an EMS lunch, by enjoying his Cheese with very hottest oh his home-made chutneys!! Strange stuff, Electronic musicians!

ASTRONAUTA - Your albums are difficult to find both in LP's and CD's but you keep your entire solo discography to download in your website. Why did you choose to keep your albums available in a digital format instead of keeping them in the older formats? Are you recording or planing to record new material to release as Crystal Machine someday?

TIM - I have not enjoyed a good relationship with the music industry, and some of my best selling records have never bought me a single royalty cheque.
So, I prefer to work as a one-man cottage industry!

There is no "Market" these days for my albums in physical format that makes it worthwhile for me to produce them, but despite being only a tiny of the sales, by doing downloads my self, I can keep the losses down!
You can get my music from my own site:

I am also experimenting with a Bandcamp page:

This was basically to allow people to choose their format, but it seems a bit of an online-jukebox to me, with 99% of plays, and 1% of sales, so I do not know if I will continue with it.

ASTRONAUTA - Well, thank you, my friend. Hope you can come to Brazil soon!!! My best wishes to you, Tim!