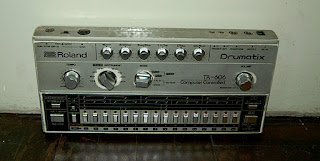 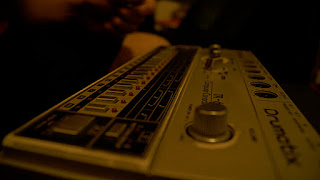 In the begining of the 80's Roland Corporation - the japanese company founded by electrical engineer Ikutaro Kakehashi - was about to complete a decade of existence as a well established company in musical instruments market, having as its flagship the drum machines and monophonic and (from 1978 on, with the launch of the Jupiter 4) polyphonic synthesizers. In 1981 the company released two models that would become a big aesthetic reference of electronic music in the following years: TB-303 (a Bass Machine which, according to my knowledge, was the instrument responsible for the appearance of Acid House in the second half of the 80's in Chicago) and TR-606 "Drumatix" (Drum Machine). Initially both were designed to be used together and with the intent to "replace" the bass player and the drummer. 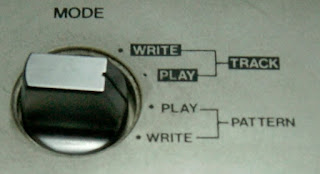 The operation of the TR-606 is very simple and its programming, in real time, is useful for creating unusual patterns (although the number of sounds is limited to only one bass drum, one snare, a high tom and a low tom, open and closed hihat and only one cymbal). These sounds have individual output volume knobs, but the TR-606 has only two audio outs: a normal output and a headphones output. The programming of a TR-606 is restricted to choose the instrument through a selector and choose where it will be within the pattern through 16 keys, with an indicator light for each. There is also a "mode" switch (which can vary between record and play a track or record and play a pattern). A time control knob and volume/power off complete the beautiful design of the TR-606. 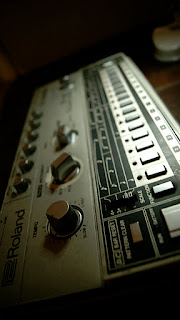 Some of the bands and musicians who used a TR-606 to record that I can mention are: OMD, Depeche Mode, Cocteau Twins, The Sisters of Mercy, Nine Inch Nails, Big Black (Steve Albini's band, who used a TR-606 to record and credited just "Roland" as the drummer), Moby (who has an amazing and incredibly huge collection of vintage drum machines), Crystal Method, DJ Jazzy Jeff, Smashing Pumpkins (in the song "Eye", from David Lynch's "Lost Highway" movie soundtrack) and Luke Vibert, among others.

My good friend Renato Yada (who played bass for almost two years in my solo band) gave me my TR-606 as a gift. One day he told me he was moving from his house and had found an old Roland drum machine and that it had been used to record the albums of the brazilian band "Fellini" (from my friend Thomas Pappon. Thomas is also the bandleader of "The Gilbertos", a band that I had the honor to play my vintage keyboards in some shows to release their third album, "A noite sonhamos", recently in São Paulo). I was very happy with this gift and even happier when I saw that the drum was working fine and in very good conditions. I used the TR-606 in half of the songs from my new album, "Zeitgeist/propaganda", as well as I used it to overdub some sounds of my Roland CR-78. The serial number of my TR-606 is 136.700.

This ad was scanned from a magazine at the time of release of TR-606/TB-303 and I found out on the Internet: 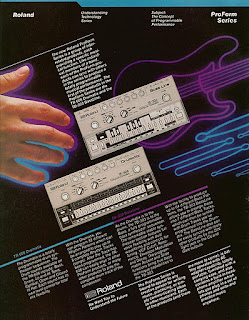 And here are some videos of bands and artists I've mentioned above!!!

Footage from the film 'Lost Highway' with the song 'Eye' by The Smashing Pumpkins:

According to Renato Yada, my TR-606 was used on the first albums recorded by brazilian band Fellini! "Rock Europeu" is from Fellini's first album, "O adeus de Fellini" (Baratos Afins, 1985). This song can also be heard on the compilation album "The sexual life of the savages" (Soul Jazz Records, 2005):

Moby showing his huge and amazing collection of drum machines:

And I used mine on "Wir sind nicht allein" and many other songs on my third album, "Zeitgeist/propaganda"!!!